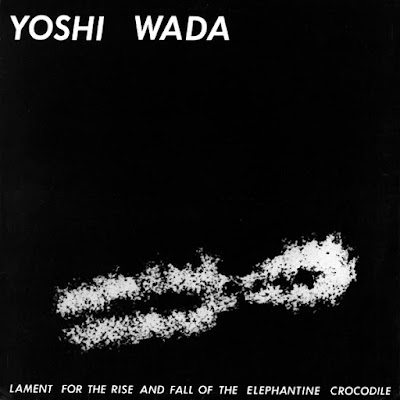 
Yoshimasa "Yoshi" Wada (born November 11, 1943), is a Japanese sound installation artist and musician living in the United States. He lived in New York for many years but now lives in San Francisco, California.
Born in Japan, Wada joined the Fluxus movement in 1968 after meeting George Maciunas. He also studied with the North Indian vocalist Pandit Pran Nath. Wada's works often incorporate the use of drone and are usually performed at very high volume, allowing for the overtones within the sound to be heard very clearly.
He frequently performs his own compositions, which feature much freedom of improvisation, on Scottish highland bagpipe and voice, and also employs a number of homemade instruments. These include "pipe horns" (very long horn-type instruments made from metal plumbing pipe) as well as large reed instruments involving multiple bagpipe-like pipes connected to a large air compressor; due to their appearance, Wada named these latter instruments "Alligator" and "the Elephantine Crocodile". His music has been scarcely released on recordings, having seen only two LP releases, on the India Navigation (1982) and FMP labels. Lament For The Rise and Fall of Elephantine Crocodile, The Appointed Cloud and Off the Wall were reissued by Japanese labels EM Records and Editions Omega Point in 2008.
Wada is also known for his mechanical and robotic installations. In Pittsburgh, Pennsylvania in the mid-1990s, he performed a whimsically entitled piece, Lament for the Rise and Fall of Handy-Horn, in which several compressed-air "auditory flare" signals used for nautical emergencies (the "Handy Horn" brand named in the title) were sounded for the duration of their usefulness, giving rise to an alarmingly high-decibel air-pressure environment and charged psychoacoustic environment.
Totally cool & weird album by this Japanese composer/instrument maker who was part of FLUXUS, moved to NYC for a while and made these weird, unique, bagpipe/reed-like instruments that were force-fed air by a compressor! LONG tones, obviously. Never before on CD, this was released on the jazz-oriented India Navigation label and has been unavailable for a couple of decades. Conditionally highly recommended if you dig the BIG drone! Contains full liner notes and photos of the instruments.

"If you have heard the music of Yoshi Wada, you have no doubt been impressed by his amazing sound-worlds. Born in Kyoto, he moved to New York in the late 1960s. He is well-known as a Fluxus artist with links to La Monte Young, and has been involved in many performances and sound installations. However, he has released only 2 recordings (as his solo albums) , both hard to find. Finally, a CD reissue of his most important and rarest LP, "Lament For Rise And Fall Of The Elephantine Crocodile" (Recorded in 1981, Issued on India Navigation in 1982). This CD contains 2 pieces: track 1 - solo overtone voice (he studied with legendary Indian vocalist Pandit Pran Nath) recorded at performance space 'Dry Pool', with a deep underground echo feeling; track 2 - dense psychedelic drones using bagpipe-like self-made instrument. These wondrous sounds will take you to another, better world!!"