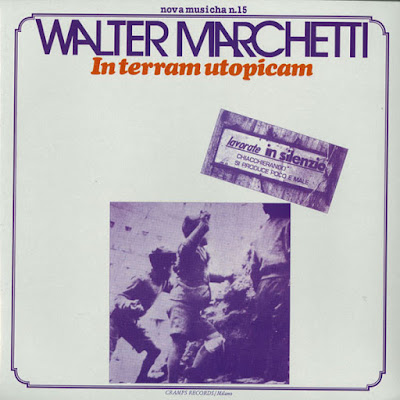 
Walter Marchetti is one of the most original and controversial authors in the world of contemporary musical creation. In his works he has always explored and focused on the fine line that links music to his own visual representation. He does this with an unmistakable realistic rigor, blending subtle provocation and paradox, without ever breaking from a refined poetic allusiveness. He is undoubtedly one of the protagonists of the Neo-avant-garde musical scene since the end of the 50’s and one of the first European composers to have accepted the iconoclastic challenge of John Cage’s Dekomponieren. He is a pioneer of action music and performance art, and in 1964 his historic collaboration with Juan Hidalgo in Madrid gave rise to the legendary ZAJ group. His works, as a whole, constitute one of the rare examples of conscious extension of aesthetic radicalism to musical poetics. With an installation especially conceived for the space in borgovico 33, Walter Marchetti will present his new book-score De musicorum infelicitate two years after the cycle of compositions bearing the same name (subtitled Dieci pezzi in forma di variazioni dolenti) released in a compact disc by the Alga Marghen label. This is not only the score of one of the greatest and without a dubt most significant works by Walter Marchetti, but a series of aphorisms and statements that continue page after page alongside the musical notation that allows us to see the author’s point of view on music, creativity and the contemporary situation in general. He brings to it a peculiar ethic vision tinged with a claim for radical humanism. The book does not allow for any lyrical relaxation although it is not without intense poetic moments. It is never “overshadowed” by or in the service of art, but tends to transmit an immediate image of music, playing on the ambiguity of annotated codes and their mirror-like relation with the intricate and intentionally “deformed” stratification of sounds in the homonymous musical piece it refers to. De musicorum infelicitate is produced by Emanuele Carcano under the auspices of the Alga Marghen label in Milan, and the bilingual Italian/English edition is edited by Gabriele Bonomo with the contribution of Henry Martin for the translation and coordinating editor Giorgia Nessi. The book in DIN A 4 format, is 200 pages long in a limited edition of 300 copies which will be distributed together with the reprint in two long playing records of the composition bearing the same tile previously released in compact disc (Alga Marghen, plana-M alga 15, book + 2 LP). In the installation at borgovico 33, the books will be placed on a series of music stands located in various points in the space allowing the viewer to turn the pages of the score while listening to the entire musical work De musicorum infelicitate (Dieci pezzi in forma di variazioni dolenti) according to a random time sequence. During the event, the author will execute a performance of his Musica da camera n. 215.


“When I was young, I wasn’t shrewd enough to close my ears in time.”
Walter Marchetti was born in 1931 and holds the Chair of Eventology at the Department of Advanced Arts at the University of Hoggar,Wasteland. After a number of years of research in the now distant 1950s on “Synthetic Artists of Freedom”–a movement which rejected the inexorability of entropy as the final destiny of everything–in 1965-66 he published in Madrid Arpocrate seduto sul loto, a real treatise on Eventology. He describes himself as follows: “I was condemned to go to work while still quite young, and I have worked at various times as grape picker, brick layer, saddle maker, wine merchant, metal cutter, lathe operator, frame welder for automobile and bicycle parts, skilled worker at an industrial glass factory, handyman, post office clerk, music and record salesman, music consultant, sound technician, translator, director of an art gallery, typesetter, entrepreneur, etc. It is important to stress that in music I am self-taught, in spite of a number of attempts to study music seriously, with all due rigor. Such efforts were always abandoned since they finally struck me as anything other than serious. In 1954-55, I made the acquaintance of Bruno Maderna, a great musician and a great friend, who gave me a hand and to whom I remain quite deeply attached even in spite of the differences that arose in 1958 as a result of John Cage’s “descent” on Europe, notwithstanding the fact that Maderna himself was the person who ushered me into that “cage”. Everything has been quite different ever since. Juan Hidalgo and I have been very close friends for more than forty years, and we have worked together on numberless projects, both musical and otherwise.” In the winter of 1960, Walter Marchetti spent a period of time in the New Hebrides. A few years later he moved to Spain, where he and Juan Hidalgo founded the ZAJ group in 1964. After lengthy travels to myriad places throughout the world, while constantly involved in various activities, both musical and not, he returned to Milan, Italy, where he now lives and works. His first record, La caccia, was published in 1974, followed by In terram utopicam in 1977, Per la sete dell’orecchio in 1984, Natura morta, Vandalia and a new version of Per la sete dell’orecchio in 1989, Suoni dentro Suoni in 1996, Antibarbarus in 1998, Nei mari del sud. Musica in secca in 1999, and De musicorum infelicitate in 2001. He has also authored the Italian translations of Daniel Charles’ conversations with John Cage (Per gli uccelli, Milan, 1977) and of Pierre Cabanne’s with Marcel Duchamp (Ingegnere del tempo perduto, Milan, 1979). For more than thirty years, his work has been presented at the most important of the world’s international music events, and he remarks that he has always viewed such occasions with mixed feelings of pleasure and shame. His work has been seen and heard in: Darmstadt, Cologne, Milan, Las Palmas and Santa Cruz de Tenerife (Canaries), Barcelona, Madrid, Frankfurt, Paris, Lisbon, San Sebastian de los Reyes, Almorox, Algiers, Schauinsland, London, Aachen, Berlin, Clermont-Ferrand, Zaragoza, San Sebastian, Bilbao, Alcoy, Rouen, Düsseldorf, Kassel, Valencia, Tokyo, Osaka, Pamplona, Santos and São Paulo (Brazil), Cordoba (Argentina), Albany, Hanover (USA), Montreal, New York, Amherst, Urbana-Champaign, Buffalo, Minneapolis, Oakland, Berkeley, Colorado Springs, Middletown, Cambridge (USA), Venice, Munich, Bern, Geneva, Spoleto, Rome, Pavia, Algeciras, Cadiz, Florence, Pescara, Genoa, Wiesbaden, Marseilles, Eindhoven, Amalfi, Lyons, Bologna, Pratolino, etc. As far as everything else is concerned, his music is truly beautiful.