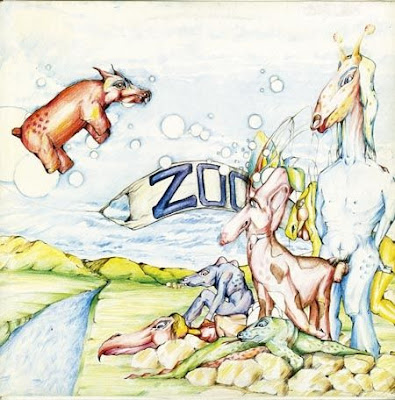 
A little known quartet from Groningen (Netherlands) whose album contained long melodic progressive rock numbers with a medley Beatles covers on the B-side.
The abstract cover art is more impressive than their music.
The bass player (Bert Veldkamp) became later a member of Kayak.
This album is now hard to find and is also a collectors item.

Zoo was a melodic progressive rockband from the town of Groningen. They were formed in 1970 when the band Spring changed its name. They disbanded in 1974. Bass player Bert Veldkamp joined Kayak, a few others started the new group Kangaroo. During their existence they released four singles: "Be free / All my life" (Injection 134.555) in 1971, "Change my world / Holiday" (Philips 6075 114) in 1972. And "Walkings / Love love" (CNR 141 198) and "Cold night / Naugh moo" (CNR 141 228) in 1974. In 1973 an album was released, 'Zoo' (CNR 541 645).
• The music that Zoo played is melodic rock, with hints of progressive rock. The music is not complex. At best it sounds like Argent, but at it worst they sound like your average seventies band. An example of the first is "Zoo music", an example of the latter is "Everybody knows". Another enjoying track is the Beatle medley. It all sounds very professional, melodic, but also a bit dull. No adventure or any risk in the music, so not a recommendation for a truly progressive album.

• Despite releasing four singles and an album over a several-year period, early Dutch progressive outfit Zoo are pretty obscure, almost certainly due to their inability/unwillingness to fully commit themselves to playing full-blown prog. Their choice, obviously, but history has proven their short-termism unwise. Their first single, 1971's Change My World b/w Holiday, is a late-period psych effort, both sides vaguely comparable to Procol Harum, albeit, er, nowhere near as good, the flip being the superior track. Keys man Eddy Meyer plays an orchestral-ish Mellotron strings/brass mix on the 'A' to passable effect, although he didn't record with one again for another two years.

• Their lone album, 1973's Zoo, is pleasant enough, yet simultaneously highly undemanding, being more of a typical mainstream rock album of the era with progressive overtones than a prog album per se. Better tracks include opener Cold Night and Zoo Music (despite the drum solo), although Everybody Knows' rock'n'roll-lite and inexplicable Beatles medley Dedicated To You All are pretty inessential, frankly. Meyer adds Mellotron to a handful of tracks, with strings on Cold Night, I'm Here and the Baby, You're A Rich Man segment of Dedicated To You All, only to any great effect on the first-named.

• Zoo's final single from late '73 ('74?) was a re-recording of the album's Cold Night, its new, funkier arrangement doing it no favours, although oddly-titled instrumental flip Naugh Moo is almost certainly the best thing the band ever wrote, sounding slightly like Trace before that outfit formerly existed. Meyer adds Mellotron to both sides, with nicely upfront string parts that improve even the otherwise dodgy 'A'. Zoo split in '74, bassist Bert Veldkamp going on to play with Kayak, other members forming the equally-obscure Kangaroo; none of their small catalogue is currently available, although downloads can be found. Are they worth hearing? A handful of tracks (principally Naugh Moo) are worth the effort, but, that track aside, we're not exactly talking 'lost classic' here, musically or Mellotronically.
Posted by Zen Archer at 2:36:00 AM

Email ThisBlogThis!Share to TwitterShare to FacebookShare to Pinterest
Labels: Kayak, Netherlands, The Zoo