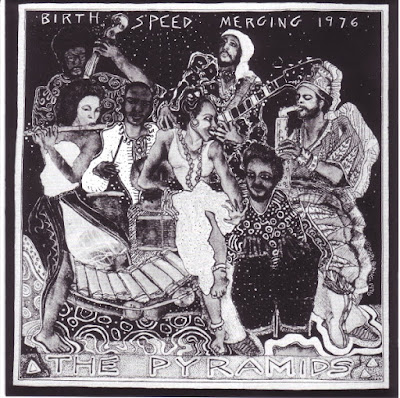 
Birth/Speed/Merging represents the San Francisco Bay Area era of the band. Relocating from Yellow Springs, Ohio in 1974, The Pyramids quickly met other musicians in the thriving San Francisco Bay Area music scene. After the departure of original member Kimathi to continue his African studies a very talented acoustic bass player named Heshima Mark Williams joined the band along with a new conga player named Mcheza Ngoma and new drummer Augusta Lee Collins. The Pyramids began working extensively around the area. Within the next year Kimathi returned from his travels and rejoined the band. The Pyramids now had two bass players; one acoustic and one electric. The composition "Jamaican Carnival" pays homage to the beautiful Caribbean island Jamaica and is one of the bands' most danceable tunes. For the composition "Birth/Speed/Merging Suite" the band utilized the brilliant percussionist Kenneth Nash to play on the track and it is one of the bands' most interesting and exotic compositions. There are a variety of unusual and beautiful percussion and string instruments used on the track featuring the Ugandan Harp, the Chinese Cheng, and a string instrument called the rosenbow. The composition is an aural delight of unusual sounds and beautiful colors.
Posted by Zen Archer at 5:40:00 PM