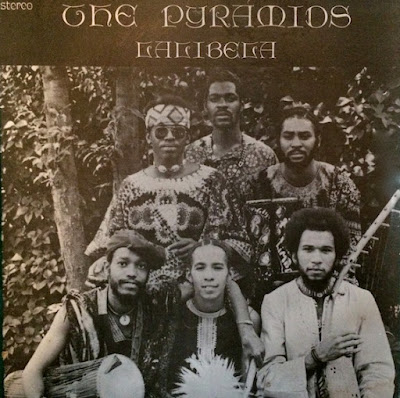 
We climb to the Highest Temple in Lalibela
We partake of the Holy Water, eat bread and drink Tej
in the Temple with our brothers.
We look out over the immense, mountainous land
of twelve sacred churches, and bathe our spirits
in their warm majesty
We drink heartily form the Holy Well of Lalibela
the Sacred Place.
a
LALIBELA written by
Idrissa & Margo Ackamoor
INDIGO by Kwame Asante


IDRIS ACKAMOOR is a multi-instrumentalist, composer, actor, tap dancer, producer, administrator, and director. He is the Founder and Co-Artistic Director of the multi-disciplinary San Francisco performance company Cultural Odyssey. Idris is also the Artistic Director of the legendary world music/jazz ensemble THE PYRAMIDS. Mr. Ackamoor has been honored with TWO Lifetime Achievement Awards for his extraordinary musical and theatrical contributions. The most recent was presented in January 2012 by the renowned BBC radio personality Gilles Peterson at the Worldwide Awards Show in London. In 2003 San Franciscoâ€˜s historic magazine, The San Francisco Bay Guardian, presented Idris with his first. During December 2013 Idris Ackamoor & The Pyramids conducted their 7th tour of Europe mesmerizing audiences at various music hot spots in Germany, Denmark, The Czech Republic, Sweden, United Kingdom and Switzerland. One of the highlights of the tour was the band’s performance at the worldâ€™s leading underground music show The Boiler Roomin London where the presenter remarked, One of the most enthralling performances weâ€™ve ever seen! Idris has performed and collaborated with tenor Saxophonists Chico Freeman and John Tchicai, the late alto saxophonist Charles Tyler, drummer Famoudou Don Moye of the Art Ensemble of Chicago, The Cecil Taylor Creative Orchestra, choreographer/dancer Bill T. Jones, writer Ntozake Shange and Pearl Cleage, his longtime partner actress Rhodessa Jones, and many others. Idris was a protege of Chicago legendary master clarinetist Clifford King who had played with Jelly Roll Morton and Freddie Keppard in the 1920s. Idris received his B.A. in Music from Antioch College, in Yellow Springs, Ohio where one of his most influential teachers was the influential pianist Cecil Taylor. Idris has also studied tap dance with legendary hoofers Al Robinson, Steve Condos, and Eddie Brown. Mr. Ackamoor is one of the first musicians of his generation to have traveled, lived and studied in Africa in 1972 â€“ 73. During his stay in Africa he performed with the King’s Prayer Drummers of Tamale, Ghana as well as lived in Kenya where he studied the music of the Kikuyu and Masai. In 2013 Mr. Ackamoor received a James Irvine Foundation Exploring Engagement Fund Award to conduct concerts, music workshops, and rehearsals to build the Music is the Healing Force Community Orchestracomposed of low-income, African American, and nonprofessional musicians culminating in concert presentations in nontraditional arts venues in San Francisco. The U.S. Department of State, Educational and Cultural Affairs Bureau selected Idris twice as an Arts Envoy. In his role as an arts ambassador he journeyed to Johannesburg, South Africa conducting residency activities inside the Naturena Women’s Prison with his partner Rhodessa Jones. In 2007 Idris conducted his first U.S. Department of State Speakers Tour of Russia where he conducted performances and workshops throughout the country. Idris has rightfully been in the spotlight of late thanks to the renewed interest in his 1970s legendary band, THE PYRAMIDS which he re â€“ united in 2010. In the last three years a stunning 12 albums have been released of Mr. Ackamoor’s music, including the first Pyramids’ album in over 35 years entitled Otherworldly. In addition, a 3 CD box set was released (of the bands 70s recordings) entitled The Pyramids 1972 â€“ 1976 â€“ They Play to Make Music Fire! As well, the reissue on vinyl of the same 70s recordings entitled Lalibela (1973), King of Kings (1974), and Birth Speed Merging (1976). All of the above were released simultaneously on Disko B Records of Munich, Germany. In 2004 Idris released his third CD entitled, Homage to Cuba. In 1999 Idris released his second jazz CD entitled, Centurian and in 1998 he recorded and released his first CD entitled Portrait. Idris has recently received an Individual Artists Award from the San Francisco Cultural Equity Program to compose for the next PYRAMIDS’album.

Spiritual Afro-jazz-influenced ensemble the Pyramids formed in 1971 while the members were attending Antioch College in Ohio. Originally featuring saxophonist Idris Ackamoor, flutist Margo Simmons, and bassist Kimathi Asante, the group eventually added several members, including various percussionists and, at one point, two bassists. Inspired by such artists as Sun Ra and pianist Cecil Taylor, the latter of whom taught at Antioch during the '70s, the Pyramids mixed African rhythms, free jazz, and even a touch of psychedelic soul. The group toured extensively, relocated to San Francisco, and released three albums including 1973's Lalibela, 1974's King of Kings, and 1976's Birth, Speed, Merging before disbanded in 1977. In 2010, the Pyramids reunited for a tour in support of their complete catalog's reissue campaign, and the group recorded an album of all-new material at Faust's studio in Germany during the summer of 2011. Otherworldly, the Pyramids' first new album in several decades, arrived the following year.

Lalibela was the first album recorded by The Pyramids following their landmark journey throughout Africa as students from Antioch College in Yellow Springs, Ohio. The album is one of the first cutting-edge "concept" albums as each side of the LP seamlessly flows from one composition to the next in the vein of a suite painting a musical portrait of the African adventure experienced by founding members Idris Ackamoor, Margaux Simmons, and Kimathi Asante. Lalibela, Ethiopia was the inspiration for the album. A journey to experience the 12th century rock churches of Lalibela by Margaux and Idris closed out their nine-month African odyssey. The personnel for the recording was augmented by new members percussionist Bradie Speller (Hekaptah), drummer Marcel Lytle, and soprano saxophonist Tony Owens (Masai). The album has plenty percussion driven rhythms, beautiful alto sax and flute melodies, soaring out-there improvisations, ritualistic chants, meditative tone pieces, high energy modal jams, and exotic African instruments collected during the African trip.