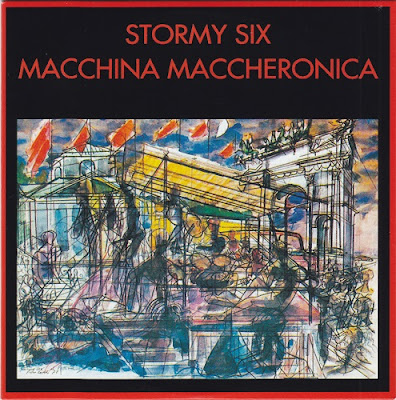 
Stormy Six took an instrumental from Cliche, added to it lyrics, made some arrangements and named all the album after it. This is "Macchina Maccheronica" (Macaronic Machine). This song is a grotesque tango for the first 3 minutes, then turns into waltz then polka...almost all the popular dancing rhythms of the old Europe, like a precursor on Weird Al Yankovic.
The intro of "Le Lucciole" is enough to make ckear thatthe first track is just a joke. The album is made of something different. If you have an idea of how an experimental band has to sound, this gives exactly this idea. The first RIO festival is an old story and this album is a follow-up, more experimental than anything else previously released by this band, with a fusion between folk and classic contemporary that can remind also to Zeuhl. The lyrics are experimental, too. The clear political statements that were still present on the previous album are now hidden if not disappeared behind words that sound well with the music but not necessarily meaningful. On "Le Lucciole" the role of main instrument that's usually played by the violin is now given to the clarinet. it's only after 6 minutes that the ensemble plays more orchestral making the track less challenging. Following there's another joke. A sort of "shake" version of "Madonina". This song, written in the 30s by Giovanni D'Anzi has become the anthem of the city of Milan where Stormy Six are from. Played in this way in just 50 seconds can be irritating for some of their most traditionalists-right-winged citizens. The "Madonina" is the statue of the Virgin Mary on the top of Milan's Cathedral.

"Megafono" (Megaphone) is a grotesque and very 'avant' song. A Megaphone is an essential device for protesters, and the joke is about the fact that the way it distorces a voice makes the speaker anonymous. There's a long "eclectic" interlude made of disconnected sounds, passages between violin, clarinet, bass and drums. At minute 3:40 there's a short rock section leading to another part with vocals. If you read the definition of this subgenre on PA, this song fits perfectly there.

30 more seconds of irriverent "Madonina" then a female speaker with an Eastern Europe accent introduces what she calls "a moment of relax". "Banca" (Bank) is an instrumental crazyness "Since when you're gone my life is empty...I can't live anymore, what will be of me? I have close this feeling in the bank!".

"Pianeta" (Planet) is even more challenging. If I think to what this band was doing just five years before... The lyrics are as hermetic as the music. A very challenging album that the Madonina interludes try to make a little lighter but it's very difficult and totally non-suitable for the Italian market of 1980. The clarinet makes a great work.

"Rumba Sugli Alberi" (Rumba over the trees) is a brasses and clarinet thing with vocals. two minutes of the most "melodic" stuff that can be found on the album even including the second half when bass and drums make it very chaotic.

I'm now thinking that what I'm writing can be interpreted as "very good and artistic music" by fans of Rio and Avant, and like an "Avoid it absolutely" by fans of more melodic and strustured things like symphonic prog.....

"Enzo" is a vocal choir totally out of what we can call "song" or "melody". It's an experiment about voice, not too dissimilar from what Demetrio Stratos made in his "Concerto all'Elfo". It appears to be recorded live but the applauses may be just added, I don't know.

"Verbale" (Report, intended in legal or bureaucratic sense) is in some way reminding of the political/social period of the band, but the lyrics are very hermetic. The good is that even if one can sometimes catch a sort of melody, this track is totally unstructured and unpredictable both in terms of notes and rhythm. Who makes a great work here is the bass that keeps a jazzy profile.

Another interpratation of "Madonina" and the last "regular" track of the album: "Somario". As Macchina Maccheronica also this track is taken from Cliche'/Pinocchio suite and "Somario" is a joke between "Sommario" (summary) and "Somaro" (donkey), so it's clearly related to Pinocchio. The track is recorded live.

The last 15 seconds of "Madonina" closes the album.

A challenging listen but also rewarding for the listener. Of course it's not an album to be listened while driving by car. Take your time and the right moment to dig into the various moments. A must have for the fans of the genre also because it's the first Stormy Six album of the RIO era.