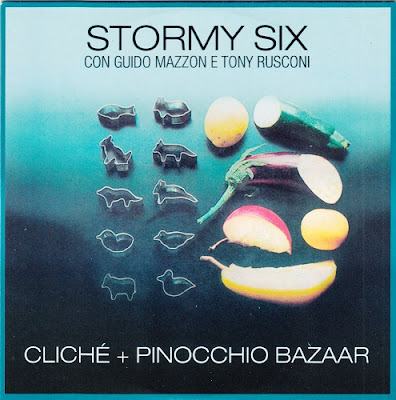 Finally the beginning of RIO. The Stormy six have still a lot of acoustics. A mandolin in general sounds folky but in tracks like the opener "1789" (the year of the French revolution) it sounds grotesque. The final fade-out is a pity, but the track is very interesting. Then the piano comes to "Carmine". This piece of piano and violin sounds like classic contemporary. Who could have imagined a change of this kind in the band's music? Not that I dislike the previous efforts, but this is totally different and came actually unexpected.
The story of this album is quite unusual. It's the reprint of two different albums one of them unreleased, but the mood of the two albums is so similar that it's not easy to vcatch if you don't look at the track list.

The first two tracks are two previously unreleased, extraneous to both the albums.

Starting from the third track until track 16 we have a suite inspired by the Shalkespeare's tragedy "Titus Andronicus". It's pure avant-garde, with the same violinist that once was playing country/bluegrass that's now making classic contemporary. The use of mandolin, contrabass and acoustic guitar makes it even more avant-garde. It's not too challenging anyway. Some parts like "Picnic" are easy enough even for those who are not familiar with this genre. Even neo-prog fans could enjoy it.

The remaining tracks are inspired to "Pinocchio" (The album title would have been "Pinocchio Bazaar"). This is more oriented to chamber music and has more melodic moments. I find it easier than the Shakespeare's thing even if on similar chords and mood.

An enjoyable album that can also be used as starting point for people who wants to approach the genre.
Posted by Zen Archer at 3:35:00 PM