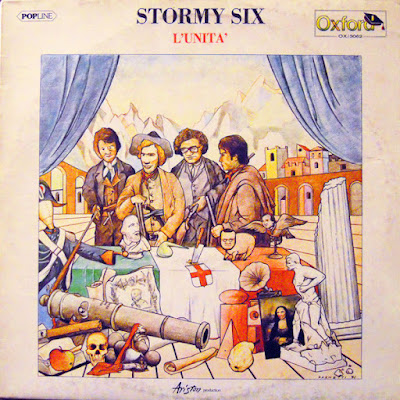 If one looks for classic RPI and doesn't know anything about the concept and doesn't care of the lyrics this album is surely a disappointment.

For a band like this, the lyrics are an important element. It's where you first see the "Opposition", then imagine an American band making a concept album which tells the non- official story of Lincoln or Washington, in which they are everything but heroes. I don't know if a similar story exist, but "Garibaldi" is the most acclaimed national hero in Italy, and telling a story of murders and war crimes, as probably it really was, as probably all the wars are, is really "In Opposition".

Then it's also a true concept album. The story of the Italian independence wars seen with the eyes of people. The country-western theme of "Garibaldi", seen like a sort of cowboy is grotesque.

"Tre Fratelli Contadini di Venosa" (Three farmer brothers from Venosa) is another slow ballad about three brothers who refuse to join the new nation's army and become bandits to be killed and their bodies exposed in a place. Musically it's trivial, but the triviality of the musical theme and the drama of the story create a suggestive contrast.

"Pontelandolfo" is a town close to Naples remembered as the location, along with Casalduni, of a massacre of largely innocent population by the Piedmontese occupation troops in 1861. This is one of the episodes that are not teached in the Italian schools. Musically it's surely more prog than the previous two songs and there's the first true guitar solo of the album.

"Sciopero!" (Strike!) Is about a strike in a factory in Naples which is repressed by the police in a massacre. Again the music is full of joy while the story is dramatic. It's another episode of the "Unity", but it's a kind of things quite frequent in the early 70s in Italy.

"Suite Per F & F" (Suite for F & F) is a sort of epic for its length, clearly reminding to CSN&Y. It's about the student's movement of the late 60/early 70s. This track contains many instrumental parts that may come from "4Way Steet". For fans of Neil Young.

"La Manifestazione" starts with a guitar that seem to have inspired "Hot River" of Carla Bley and Nick Mason. It's almost identical. The song is very in line with the italian beat, mainly "I Nomadi", or also the "Moody Blues", a band that I Nomadi were highly inspired from. It's another song about a bloody repression.

"Fratello" (Brother) is an acoustic ballad with almost no music