Shadowfax
1986
Too Far To Whisper 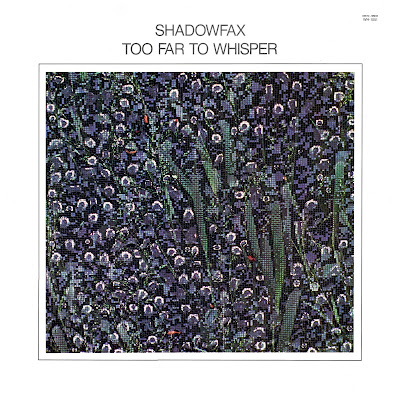 Shadowfax formed in the mid-70s around founding members Chuck Greenberg (on sax and flutes), G.E. Stinson (on guitars) and Phil Magginni(on bass) and eventually were signed to the new-age label Windham Hill, where the band would release a number of memorable albums, none more so that this one, their 1986 release.

"Too Far to Whisper" (10 tracks; 42 min.) brings the perfect mix of the band jazzy-new age instrumental music. From the opening sounds of the title track, the music feels laser-sharp, and with memorable hooks left and right. The slow "What Goes Around" is the only track on here that features vocals, and it feels a bit out of place, frankly. "China Blue" brings, not surprisingly, oriental sounds. "Orangutan Gang (Strikes Back)" is an up-tempo song that brings out the best in the band's interplay in its rich instruments, and one of my favorite tracks on here. "Streetnoice" is another urgent track that wants to make you wanna get up and dance, enjoying Chuck's wood flutes and lyricon, just great. Truth be told, there is barely a weak track on here, and it's easy to see why this became Shadowfax's best selling album: it's just enough mainstream yet it keeps its edge.

Back in the mid and late 80s, I was a HUGE fan of the Windham Hill label, and bought quite a few of its then-vinyl album releases. I didn't repurchase them all on CD, but this album was one of them, and I'm glad I did, looking back after all these years. Back then, there would be the sporadic Windham Hill label tour, packaging a number of their artists, and on one of them, I caught Shadowfax in concert, and what a show they put on, just fantastic. Meanwhile, "Too Far to Whisper" remains as fresh today as when it was releases 30 years ago (has it really been that long?). HIGHLY RECOMMENDED!
Posted by Zen Archer at 6:23:00 PM