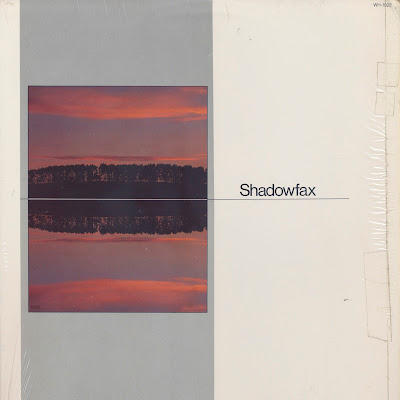 
This self-titled album was my introduction to the band. I admit that I found it at random, and the only reason I got it was because I liked the name (yep, as far as I know, named after Gandalf's horse); I had no idea what the band sounded like. However, as this was a Windham Hill release, I was expecting something light, perhaps new age sounding, which is basically what I got. However, upon listening a little closer a few more times I noticed that it wasn't just your average new age: there was something a little more to it. I heard shades of familiarity, however distant, with some of my more prized prog rock music. And after a bit of research, I came to find out that Shadowfax indeed began their career in the 70s with the much more progressive sounding Watercourse Way (review of which I have also submitted), and did not release Shadowfax until 6 years later in the early 80's. They veered a bit away from prog in the 80's, except instead of moving towards pop (like many prog bands did) they went to new age/easy listening. Pretty much perfect for a Windham Hill release.
I've come to think of the album as "prog lite". There are parallels with the lighter tracks from Watercourse Way, but gone are the truly jazzy themes, vocals, hard drumming and electric guitar. The music is, for the most part, calming and evocative of a peaceful natural world. The best songs to my ears are the first two tracks: Angel's Flight and Vajra, which are two of the slightly proggy tracks that have a touch of off-beat rhythm and some excellent acoustic guitar. There are no exceptionally memorable tracks, but the album is good either for background listening (when you are doing something and don't want to be too distracted or emotionally swept away) or perhaps it could be good for meditation. It's a good album for those who appreciate prog, but occasionally like to dabble in or chill with light new age a bit.