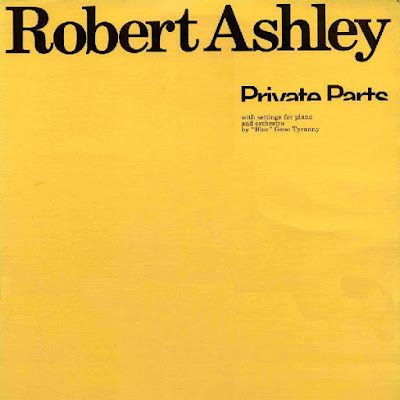 An odd little album with Ashley's strangely hypnotic monotone reciting a text above an accompaniment of tablas and keyboards. I never really got a clear sense of what the text was about, but I don't really think that's all that necessary in this case. The instrumental background is as hypnotic as Ashley's voice with an unceasing tabla and simple progressions played on keyboards, mostly on a Polymoog. The overall effect is a static mix of three fairly distinct timbres which don't really seem as if they should work together, but somehow do. I wasn't so sure at the start, but withing 3 or 4 minutes I'd been successfully sucked on in.
On each side of this record, the composer reads an abstract prose fiction over "settings for piano and orchestra by `Blue' Gene Tyranny," and that's it. The vocal style is a kind of hypnotic singsong; the quiet settings are dominated by piano, tabla, and what sounds like a string synthesizer. I like it more than Discreet Music, less than Another Green World, and about as much as A Rainbow in Curved Air. I suppose I prefer side one, "The Park," because I like the verbal content more, although in fact I perceive the reading as music, just like I'm supposed to, and have never managed to follow the words all the way through. A friend who's done yoga to this record--not an arty type, incidentally--is reminded of going to sleep as a child with adults talking in the next room. Then again, a rather more avant-garde friend who made me turn it off is reminded of the spoilsport who used to read the rosary for five minutes just before his favorite radio program
Posted by Zen Archer at 3:04:00 PM