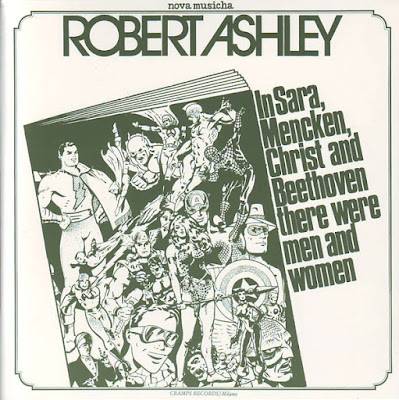 01. In Sara, Mencken, Christ And Beethoven There Were Men And Women

Though this work is a collaboration with Paul DeMarinis, this original release did not give him equal credit, and this was not remedied until the album was reissued.


This uniquely original work for voice and electronics dates from 1972. A 128-stanza poem by the legendary John Barton Walgamot traces a hidden story of social progress and influence within the gradual repetition of a single grand phrase. For example, "In its very truly great manners of Ludwig Van Beethoven, very heroically the very cruelly ancestral death of Sara Powell Haardt had very ironically come amongst his very really grand men and women to Rafael Sabatini, George Ade, Margaret Storm Jameson, Ford Madox Hueffer, Jean-Jacques Bernard, Louis Bronfield, Friedrich Wilhelm Nietzsche and Helen Brown Norden very titanically." In the other verses names are added and subtracted, and there occurs a subtlety organized variation of syntactical parts leading to further mysterious integration of meanings. The voice part is read with as few inflections and breaths as possible -- in the first realization prepared on tape, all pauses were removed, so that the voice has this eternal quality. (Gertrude Stein once mentioned that she aimed for this same quality while in the 1934-35 recording of her works, but had to settle for reading in long breaths). The voice activates electronic sounds that respond with inflected sounds; in the initial realization for records, electronic sounds designed by composer Paul DeMarinis were variously beautiful and humorous. The musical effect is that of an internal voice stimulating involuntary ideas and feelings. This piece, together with Ashley's "Automatic Writing" (1979), "The Wolfman" (1964), "Fancy Free, or It's There" (1970), "Purposeful Lady Slow Afternoon" (1968, from The Wolfman Motorcity Revue) and "She Was a Visitor" (1967, from the opera That Morning Thing) offer a profound musical exploration of the relation between the physical nature of the voice and social/language behaviors.