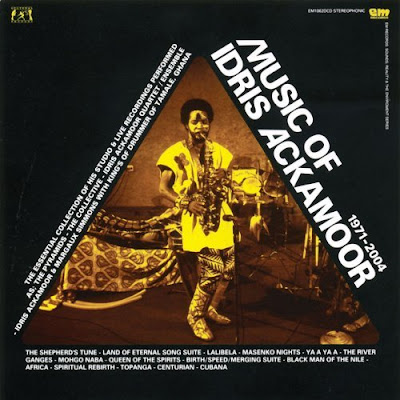 
2CD collection of the ex-leader of legendary Afro-spiritual/deep funk/free jazz group from 1970s Ohio (later in SF), The Pyramids. Their music is one of the most deep attempts by African-Americans, deep sounds like Strata-East, aggressive performances like Tribe or Black Jazz, every free jazz/funk collector should agree on it. Featuring 10 pieces of The Pyramids taken from their 3 albums and unreleased (!) recordings (including their first live recording in Holland!). Notably, The Pyramids had even stayed in African countries like Morocco, Ghana, Kenya and Ethiopia and studied real African culture and music there in the early 1970s. Do you know other African-American jazz musicians who had done such a road trip in the early 1970s?? Also featuring the never-heard pre-Pyramids, P. Sanders and Strata East recording as The Collective, and 4 pieces from the late '70s to '00s, recording as Idris Ackamoor Quartet/Ensemble. Sixteen pieces in total. Ackamoor owns all original master tapes (it's a miracle!) and Em Records checked them all and compiled their finest and best cuts. All digitally re-mastered in excellent sound shapes.

Woah, now what is this? Jazz with heavy African & Indian influence plus some rough avantgarde experimentation. Not that unique a combination but there is something very mystic and unique about this compilation. Ackamoor plays some VERY intense alto sax at times and interestingly he doesn't do that usually as a solo - the music is in constant evolution, changing from easygoing bass-driven Egyptian melodies to nightmarish chaos in a few seconds, then going back again when the soloists slow down. I'm not one to use excessive hyperbole but damn, the solos on "Black Man of the Nile" are not just motherfucking intense, they're mother-Alber Ayler-fucking intense. There's a definite Sun Ra influence too but I think Ackamoor's weapon of choice gives him a more solid down-to-Earth sound. Choirs are featured on some songs, and their nonsense vocals work magnificently.

As seen from the title, this compilation showcases Ackamoor's music over the years so there's no actual theme to the album. Doesn't bother me, as he has a very personal sound and the CDs don't feel like they go all over the place, there's a cohesion. The primary band featured here is The Pyramids, whose output from the 70s has a distinct Egyptian & Arabic vibe. The band actually toured African countries during the time, studying the local music & culture, one can definitely hear they're very serious about this stuff. Real passion & intensity. On disc two some ensembles operating under Ackamoor's name are found, their sound is more typically "African-American", at times heavily resembling Art Ensemble of Chicago. The first song on the first disc is by The Collective, whose sound is a bit different from the rest of the album. It's an odd introduction, but the compilation is chronologic so I guess it's the logical choice.

Excellent stuff recommended to any fan of free- & African jazz.