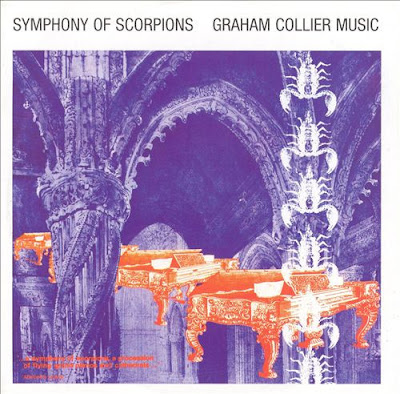 Symphony of Scorpions, recorded late in 1976, was loosely based around Malcolm Lowry's shambolic novel of the same name. Written more as a saxophone concerto to showcase the work of sax great Art Themen, the ensemble Graham Collier formed for the date numbered 12 pieces, as it did for the previous year's New Conditions, and included five members of his regular group, including Harry Beckett, Ed Speight, John Webb, Roger Dean, and, of course, Collier himself. In addition to Theman, Peter Duncan, Henry Lowther, Malcolm Griffiths, Tony Roberts, Mike Paige, and John Marshall filled out the band. It is through the solo statements by Theman that new themes, motions, and directions are uncovered in Collier's loosely written text. At times indulgent, and at others very sparse, the ensemble moves along with excellent focus, drama, and tension, allowing for groupings of smaller units inside the ensemble to carry the motion of this seemingly directionless ramble forward -- all the while honing in on Collier's small-figured place of balance within movement. This is an arduous listen, but is far more successful at sustenance and creative dialogue than New Conditions was, and showcases Collier as having fully embraced the vanguard, and as being very comfortable writing for such a large group.
Posted by Zen Archer at 7:24:00 PM