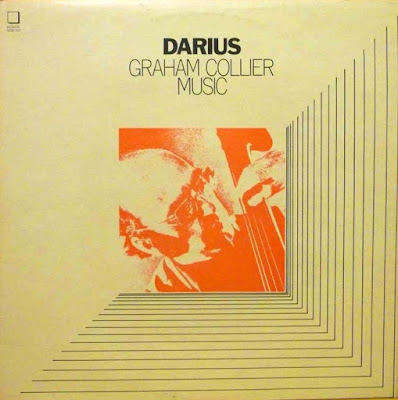 Recorded live at the Cranfield Institute of Technology, Bedfordshire, UK on March 13th 1974

Is not titled after Darius Milhaud, or after the Persian King, but after the nickname of one of composer, bassist, and bandleader, Graham Collier's friends. This is easily his most ambitious work, in that it takes the notion of the extended pieces he was working out on Mosaics and Portraits even further. It turns these ideas toward one all-encompassing work that uses themes, variations, extended harmonic blueprints, and free improvisation -- both collectively and in solos -- to demonstrate how one series of ideatic figures can commingle and refract until an entirely new schema arises from their individual disappearances. The band this time out dispenses with the saxophone chapter altogether, and adds monstrously gifted trombonist Derek Wadsworth to the mix, along with Ed Speight on guitar, Geoff Castle on electric piano (a first for Collier), the man himself in the bass chair, and stalwart drummer John Webb. Trumpeter Harry Beckett returned to the Collier fold for this live date, and adds immeasurably with his long, loping lines played both in concert with, and contrapuntally against, Speight's. There are five distinct movements in Darius, the first of which sets themes and begins the process of deconstructing them into variations, with lots of collective improvisation -- though Webb does play a solo. The second section opens up the tonal colorations, and features one of the greatest 1970s trombone solos by Wadsworth. Three, four, and five begin the process of offering the jazz solo/ensemble cadence as an articulation of the work's main body, and its outward reaches, coming back to restate the changed nature of the chromatic vocabulary of the piece. It's breathtaking, subtle, moving, and visionary. The short "A New Dawn" is actually an introductory theme to a much longer work called "An Odyssey," and features the glorious work of Wadsworth stating, and then striating, the melodic figure against a canvas of colors presented by the ensemble. This is easily the finest of Collier's early works; it breathes and moves and changes shape, tone, and intent, and comes off as a master work of balance between composition and improvisation.
Posted by Zen Archer at 7:04:00 PM