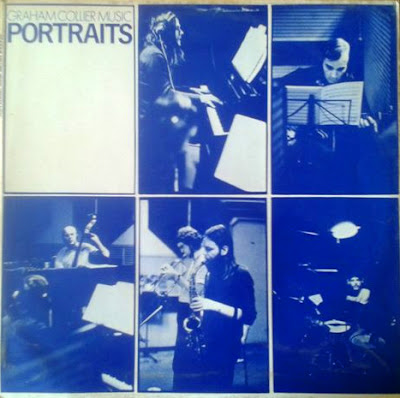 
Issued in 1973 after a pair of recording dates in late 1972, Portraits sees Collier revisiting his notion explored on Mosaics -- the working out of longer forms. Three selections make up the album, the two-part "And Now For Something Completely Different," and the nearly 11-minute title track. The ensemble on Collier's Portraits contains only drummer John Webb, and pianist Geoff Castle from Collier's previous few outings, and includes only one saxophonist, Pete Hurt. Dick Pearce is in the brass chair, and Ed Speight is added on guitar. Musically, the exotica present on Mosaics has gone by the wayside in place of a more solidly modal attack that gives play to rock thematics in terms not only of texture, but of architecture. Collier paid close attention to Miles Davis' In A Silent Way, and took from it its sense of propulsive dynamics, and its repetition, while opening up the modes to a more swinging jazz vocabulary. On the suite, riffs take the place of front line melodies, and the modes that come from them are spun out of a clipped series of notes that wind around the rhythm section in a nearly hypnotic way. "Portraits I" is also Milesian, but more in the sense of the quintet's longer reaching palette of modal interstition and elocution. A restrained palette is employed as a way of exploiting all of its chromatic elements, and then inverting them in on themselves. Language between the soloists is overlapping and entwined, rather than oppositional. Time signatures do not vary, but the series of tension placed on one note over another seems to vary, according to arbitrary tonal considerations. This is a more laid-back, yet more challenging listen than any previous Collier outing, but it also dates as one of the best.