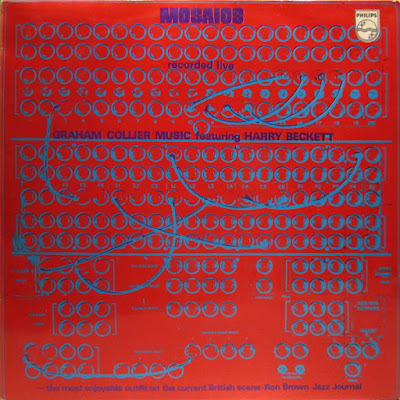 Recorded at The Torrington, North Finchley, England, December 8, 1970
Digitally remastered from the original master tapes, 1999
Made under license from Graham Collier


The expansion of Graham Collier's modalist harmonic architecture is continued on Mosaics, which was recorded live in late 1970, and issued in early 1971. Using the same band as on Songs for My Father, with the exception of newcomer Geoff Castle replacing John Taylor on piano, Collier took Eastern motifs and wound them tightly into his intervallic articulations of melody and mode, and composed a pair of longer works, each one a section. Here, themes are striated with cadenzas, and rearticulated in the creation of new themes. African, Asian, and Indian melodic fragments are used inside Collier's harmonic universe, in which the color of the blues, or the muted emotionalism of swing, is never absent . Here jazz meets the old world, which in turns refashions itself into a newer one; a world where eloquent expressions of harmony, and the convergence of different melodics, are translated as one tongue, with multiple dialects holding discourse. Of particular interest here is the beautiful contrapuntal work between Collier and soprano saxophonist Alan Wakeman, in addition to the rocksteady elegance of trumpeter Harry Beckett. Simultaneously more outside, and yet still firmly "inside the tradition," Mosaics is one of Collier's most provocative works yet, and stands the test of time extremely well.
Posted by Zen Archer at 6:36:00 AM