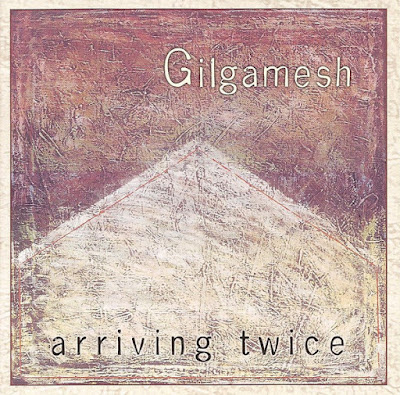 
This album consists of previously unpublished recordings that they did before they recorded their first album. Most of these songs ended up on their first self titled record from 1975. One of the interesting things about this release is that we get to hear their first bass player Neil Murray on the first two songs from 1973. The next two songs feature his replacement at the time Steve Cook from 1974. While the final four songs feature Jeff Clyne(NUCLEUS) on bass from 1975. It's also interesting that Dave Stewart became an honorary member (organ player) of the band, and played one gig with them after his band HATFIELD AND THE NORTH broke up. Unfortunately GILGAMESH folded not long after HATFIELD AND THE NORTH did. These two bands actually played together on the same bill twice in 1973, and ended the night with both bands on stage playing a 40 minute song composed by Alan Gowen specifically for the occassion. The track "Extract" on here is a section of that song. With both of these bands calling it quits, some of the former members from each got together to form NATIONAL HEALTH. The music here is really complex and it just blows me away when I listen attentively. The liner notes are so valuable as well and Steve F. from Cuneiform Records deserves a lot of credit here.
"With Lady And Friend" has a very pleasant soundscape of bass, guitar, drums and piano. Before a minute in that changes as the guitar starts playing angular melodies that carve their way throughout this song. "Your'e Disguised/ Orange Diamond/ Northern Gardens/ Phil's Little Dance/ Northern Gardens" is almost 18 minutes long. It is quite laid back for the first couple of minutes and then the pace and sound picks up. Beautiful piano melodies 4 minutes in before a calm arrives as the guitar takes a break. The guitar is back 9 minutes in, and it turns angular again at the 14 minute mark. "Island Of Rhodes/ Paper Boat/ As If Your Eyes Were Open" has some excellent drumming as the bass throbs. A very jazzy tune. Some nice guitar melodies as well.

"Extract" has a 2 minute piano intro before we are treated to some tasteful guitar as the bass, drums and keys fill out the sound. The guitar is more aggressive on "One End More/ Phil's Little Dance Worlds Of Zin" and 3 1/2 minutes in it's about as close to spacey as they will get. Nice sound though. What follows is even better as the guitar isn't as rough and the bass and drums provide an excellent rhythm. "Arriving Twice" features these liquid sounding keys that lead the way on this short and mellow track. "Notwithstanding" is a great track with some scorching guitar melodies and intricate sounds. Love Gowen on the Fender Rhodes. "Lady And Friend" is one of my favourites. It opens quietly before a collage of sounds that include bass, drums, guitar and keys arrive. Gowen shines on this one with the Fender Rhodes once again.

This is challenging, complex music yet very enjoyable. A lot of talent on display here including the band leader, the late Alan Gowen. This is MY music.