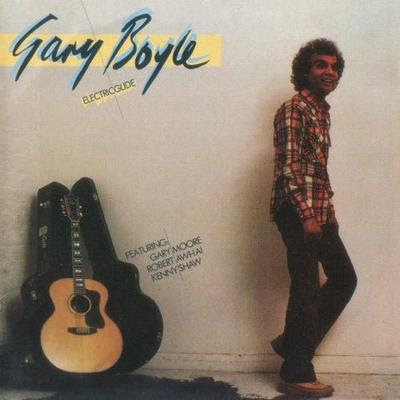 I was excited to find this - I knew of Gary Boyle through his appearance with the Soft Machine at the NDR Jazz Workshop show in 1973, as well as his work with Isotope. Isotope held so much promise - the compositions are interesting, the performances and solos enthralling (at least on "Illusion"). I had no idea that there were Gary Boyle solo albums - I had to check it out!
But I was expecting too much. The credits were under the obi (found a used Japanese import of this CD, released by Gull Records), so I didn't realize that it has Gary Moore, Simon Phillips, and bassists Phil Chen & John Giblin. Chen is Chinese-Jamaican and played with Rod Stewart for forever. John Giblin has played with Brand X among many others. Simon Phillips needs no introduction. So it's a supergroup kind of album, which I suppose might have given me pause.

The tracks with Phil Chen on bass ("Snap Crackle" and "Electric Glide" ) are straight-ahead jazz/rock fusion, bordering on easy listening - not bad, laid-back grooves, nice solos. They remind me of Japanese fusion bands like Prism and some of Kazumi Watanabe's work (especially To Chi Ka). Two more tracks ("Morning Father Joys" and "Brat No. 2") are exclusively acoustic guitar, calling to mind perhaps the acoustic sections found in Isotope. The rest of the album features Simon Phillips on drums and John Giblin on bass. These are the most prog-like on the album, as well as the most interesting. Gary Moore is on two of the Phillips/Giblin tracks - some of the playing is pretty over the top, in a good way. The ones without Moore are a bit more cerebral but still enjoyable.

Overall, a decent album, though the three different sessions being mixed up mess with the cohesion. On the jacket they are actually listed in a different order, with the Phil Chen tracks first, the Gary Moore tracks and one without next, the two purely acoustic tracks, and then one of the Phillips/Giblin tracks with acoustic guitar last - I suspect that might be the "proper" running order. If you like instrumental guitar-based prog and especially fusion, then this album may do it for you
Posted by Zen Archer at 1:59:00 AM