Cornelius Cardew - 1974 - Four Principles On Ireland And Other Pieces

Cornelius Cardew
1974
Four Principles On Ireland And Other Pieces 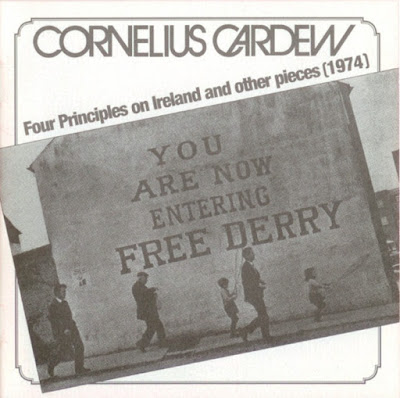 
Cornelius Cardew had studied with Stockhausen, was a leading pianist of the modernist canon as well as a founding member of the seminal improvising ensemble AMM, and had composed two landmark avant-garde works, Treatise and The Great Learning. So when, in line with his revolutionary/populist political beliefs, he abruptly began to write pieces based on workers' songs and leftist anthems, it came as something of a shock to his admirers (an essay of his was even called "Stockhausen Serves Imperialism"!). Many were utterly baffled at this about-face, going so far as to say, as did Adrian Jack in a 1975 interview, "The music you have written recently sounds almost deliberately bad…." Viewed in retrospect, however, one can see this evolution in line with the ideas of other politically active composers, including Frederic Rzewski and Howard Skempton, and recognize his work as two facets of the same musical soul. This recording, with Cardew at the piano, is a lovely sampler of this late period (he was to die a victim of a hit-and-run accident in 1981). The songs are often experimented with, fleshed out, pared down, or otherwise elaborated on, but never lose sight of the melodies. Some are particularly poignant (The Croppy Boy), others exuberant in their revolutionary spirit (Charge or the irresistible The East Is Red). Listeners may argue which of Cardew's paths was ultimately the more rewarding one, but anyone interested in the career of this crucially important British composer cannot afford to simply ignore the direction he chose. Recommended.

We sometimes forget the importance of music that has engaged the problematics of politics.Even those devoted to changing the globe as the post-war avant-garde and its post-modern representations of it today find engaging in the political only useful if it remains safely within the four-corners of the aesthetic,or funds are provided in some form, especially with all the opportunism that exists in new music today. Politics is indeed useful only if some advancement of artistic career will result from engagement.
It's curious but if we speak of literature, or poetry or film, politics seems commonplace,it is never a source of problem,or a question, it is simply always there as a resevoir of consciousness, of struggle.Yet in the corridors of serious music to mention the political is equivalent to eradication of its preserved cloistered content. Musicians and composers, for the most part have been agents of reaction compelled to fall in line with strains of the liberal conservative canons for art. Beethoven, Mahler,Schoenberg,Boulez,Adams or Glass today misunderstand the political realm often diluting its substance and implications.Adam's various operas are excellent examples.

Cardew by contrast emerged from the post-war avant-garde, a student of Stockhausen who was the first to introduce this repertoire,Cage,Feldman as well into the bland conservatism of English culture.This disk represents all piano music he wrote in the early Seventies, when the Scratch Orchestra in London was questioning its own ability to reach people through music, through events in a relevant way.There is a tale where the Miners of England had approached the Scratch to provide music for an event. And Cardew said he hadn't a clue on how to proceed. Do we play John Cage, or Feldman?
He soon learned the language necessary for musical activism and had a wonderfully inventive sense for getting into the substance of a simple folk and revolutionary tunes, and frequently wrote miniature piano tone poems, as "Father Murphy". Priests throughout history as today were activist in the cause for Ireland's independence from the Queen. And here the pianist needs to silently depress tones while playing others to excite the favorable open resonances. The result is peaceful revealing the dignity that must have been part of the coutenance of the dear priest.

"Red Flag Prelude" is a take-off on "Oh Tanenbaum" with Left words interjected, yet Cardew enriched this X-Mas tune with alternate chordal progressions, woderfully disarming and skweing the original.

Likewise "The Croppy Boy",is hear gleaned from imagery of (revolutionists in Ireland fighting Napoleon's legions)Thet had closely cropped hair. Here Cardew utilizes a dirge form, rolling beautiful chords in the key of G Major, a 17 year old boy hanged for his resistance,much like the young Fallujah=ians fighting to have their own homeland.

Cardew also tapped into the rich culture of Mao's revolution in China,quite fashionable in the Seventies (Sartre,and Godard in Paris as well) where tunes, and songs function much like icons for action, as "I polish my rifle clean", "Sailing the Seas depends upon the Helmsman", (A Mao quotation). Cardew at the end of his life saw the excesses of Mao and was beginning to reform, yet he firmly remained committed to activism under the primary signs of Marxism despite the numerous problems. All the music is under the leaf "The Piano Album", a functional musical form for musicians to accompany fundraisers, of benefits for striking workers.

"Four Principals on Ireland" is a self-contained work, about 6 minutes for Ireland's independance. It is a genuine concert solo work with flights of virtuosity, yet Cardew's musical language is always threadbare and clean, un-Romantic much of the time. He loved directedness of gesture, nothing opaque or convoluted.

Cardew we hear here was also a consummate pianist,very precise playing yet not un-impassioned when necessary.