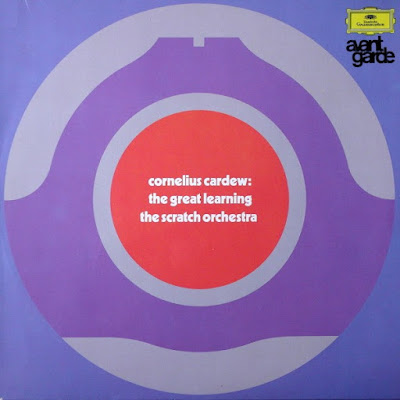 Though David Jackman is not mentioned anywhere on the sleeve, he was an active member of the Scratch Orchestra at this point and is probably one of the massed singers. Some of the other members mentioned in the liner notes are: John Tillbury, Gavin Bryars, Michael Parsons, Howard Skempton, Michael Chant, Christopher Hobbs, and Hugh Shrapnel - each of who recruited friends, family and students to swell the ranks.

This recording was also part of a reissue in 2000. Including extra track Paragraph 1 recorded at Queen Elizabeth Hall, London, on May 16, 1982. Composed in 1968.


Cornelius Cardew was the fundamental figure in the British avant-garde of the 1960s. Cardew grew up in Cornwall and at the age of 17 entered the Royal Academy of Music in London. Cardew developed an interest in electronic music, and in 1957 traveled to Germany to study in the Cologne-based electronic music studio of composer Gottfried Michael Koenig. Cardew then joined Karlheinz Stockhausen as his assistant. Cardew stayed with Stockhausen for three years, working on the latter's massive multi-orchestral work Carré.

Cardew returned to England in 1961, supporting himself by working as a graphic artist and organizing concerts. He undertook a number of challenging scores with an emphasis on graphic notation and verbal instructions, such as the verbal-vocal The Great Learning (1961) for untrained chorus and orchestra and Volo Solo for piano (1964). In 1966 he joined the improvisational electronic group AMM, probably the first ensemble of its kind in Europe. In 1967 he completed his magnum opus, Treatise, consisting of 193 pages of music in graphic notation. In 1968 Cardew, Michael Parsons, and Howard Skempton formed the Scratch Orchestra, which improvised music from verbal instructions and other minimalist prompts. Cardew published a book based on their experiments entitled Scratch Music in 1971 that has become a standard reference work for experimental musicians ever since. As composer, Skempton recalled, "Cornelius was a visionary and his humane, prophetic powers affected everyone around him."

Around 1970 Cardew became increasingly involved in leftist political thought inspired by the works of Mao Zedong. He came to regard his own work in the avant-garde as elitist and rejected it, publishing a book in 1974 entitled Stockhausen Serves Imperialism. Many of Cardew's colleagues thought he'd lost his mind, and regarded coolly the new works that Cardew composed, written in a post-Romantic, populist, and somewhat monotonous tonal idiom. In hindsight it is clear that in this phase of Cardew's work he was helping open the door to the "New Tonality," a style enthusiastically endorsed, though individually modified by the English composers who followed him -- Skempton, Parsons, Michael Nyman, Gavin Bryars, Brian Eno, Christopher Hobbs, and others. Cardew did not live to witness the success of this final contribution to English post-modernism; estranged from most of his colleagues and under scrutiny owing to his political convictions, Cardew was crossing a street in London when he was killed in a hit-and-run accident at age 45.


The Great Learning was one of British composer Cornelius Cardew's most important works, a series of seven "paragraphs" with text from the writings of Confucius and scored for generally large numbers of both trained and untrained performers. The original productions of this piece, in fact, served as the genesis of the legendary pro-amateur Scratch Orchestra. This 2000 release includes three of the paragraphs, two from the 1971 Deutsche Grammophon album that premiered the composition, as well as an additional section, "Paragraph 1," recorded in 1982. All three are fascinating musical experiences. "Paragraph 1" works its way from the mysterious, delicate clicking of handheld stones through harsh yet oddly meditative organ tones and penny whistles to the massed choral intonations of the Confucian script. It is eerie and otherworldly but casts its own unique sense of serenity over the listener. This spell is abruptly shattered by the percussive explosion that begins and carries through "Paragraph 2," an exercise in the inevitability and value of failure. The chorus is required to attempt to valiantly surmount the raging drums and to do so over a long period of time, an idea based on the Buddhist method of practicing chanting in front of a roaring waterfall; they will fail in making themselves clearly heard but something valuable may be learned in the process. Little by little, due to sheer physical exhaustion, the singers subside while the drums, gathering rhythmic cohesion, go on and on. The last piece, "Paragraph 7," for "any number of untrained voices," is a lush and complex vocal sea. From a rich and heady underlying drone, individual voices emerge and recede (is that Julie Tippett one hears?) like waves cresting and falling back. The mass of voices becomes palpable and breathing like a single, multi-throated organism. One can easily imagine, in lesser hands, a composition like this disintegrating into a new agey mush, but this one succeeds wildly as a deep and probing conception, realized fully and with passion. The performance of these pieces is credited simply to the Scratch Orchestra, an organization whose membership varied over the years, but it's likely that participants in these sessions included most of the members of AMM, Brian Eno, Gavin Bryars, and Michael Nyman, among many others. Very highly recommended.