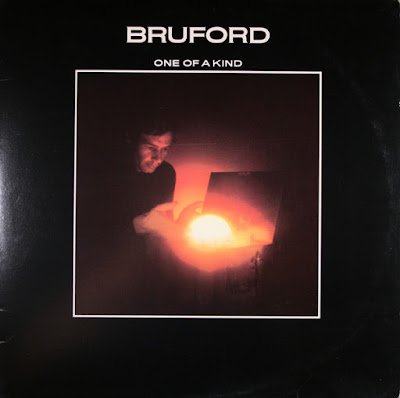 
Bill Bruford's second solo outing, called One of a Kind, features the same core lineup from Feels Good to Me, only this time the grating vocals of Anne Peacock are gone because this album is entirely instrumental (except for one section of one song). Being that it is instrumental, you can expect each musician to give their absolute all on this album, and the overall musicianship is nothing short of amazing. The highly complex and intricate rhythms and sequences are performed with ease, style, and cohesiveness in a way I've never heard any other jazz rock band perform. One of a Kind stands out from the rest of the pack of fusion albums I have because I find it to be the most captivating and overall rewarding album in this style. My absolute favorite fusion album? Yes. Why? Read below.
It begins with the churning and modulated synthesizers of Hell's Bells, which has one of the zaniest time signatures you'll ever see. Dave Stewart really pulls out all the stops on this song, especially during the section where Bruford enters. Holdsworth enters the song with a bang, too, with some great guitar work especially when he begins to solo in his classic swirling style. One of a Kind is a two part piece that begins with some zany vibes and some droning synthesizer notes underneath some more superb ascending and descending riffing from Holdsworth. The second part begins with some great drumming from Bruford and some well timed bass fills from Berlin, who really is one of the best jazz bassists I've ever heard. Travels With Myself -- And Someone Else begins with some nice synthesizers from Dave Stewart as well as some intuitive bass fills from Berlin, who really breaks away from the pack on this piece. Fainting in Coils has a brief narration on top of some forboding music. The track has a nice sense of evolution and really goes through some interesting sections. Dave Stewart and Holdsworth exchange solos and really get into a nice duel while Bruford and Berlin set the groove for the track.

Five G begins with a stellar phased bass riff from Berlin that soon becomes a groovy frantically based theme. Holdsworth really shines on this track giving a guitar solo equally as frantic as the pace of the song. Bruford also is a great on this song with many well timed and great sounding fills. The Abingdon Chasp is probably my favorite song on the album along with Hell's Bells. This Holdsworth written tune is just utterly perfect, from the harmonized guitar chords and the superb progression of the musicians, to the great bass/drum interplay between Bruford and Berlin, to the overall stellar riff and atmosphere of the song, it's all there. Forever Until Sundary is a more atmospheric and ethereal piece, with a lot of floating keyboards and a nice keyboard theme as well as some intuitive drumming from Bruford, who can make even the most simple of drumbeats into something amazing. The song quickly picks up in pace and becomes a great guitar driven piece with some great bass work from Berlin underneath the floating and smooth leads from Holdsworth. The Sahara of Snow ends the album is a two part extravaganza. The first of which begins slowly, with a dissonant and eerie organ that changes pace quickly by the stroke of Bruford's sticks as he gives another great drum fill. The piece builds up nicely and never gets too out of hand even during the most trick of situations and never gets boring or contrived, just all out playing for around 9 minutes (that's if you add the two parts together).

In the end, while Feels Good to Me was a good album that had some flaws vocally, One of a Kind is a truly one of a kind album with some incredibly talented musicians playing some great complex and challenging music. There are really no weak tracks on this album and I can't really fault it with anything remotely bad. It's a perfect record, and I am proud to call it my favorite fusion record. Recommended to all fusion fans as well as those who like the power and prowess of Bill Bruford.
Posted by Zen Archer at 2:30:00 AM