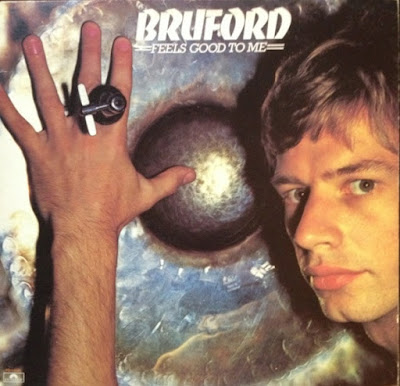 
Pick up just about any of the most successful albums from progressive rock's heyday, flip it over to the credits, and there's a good chance you'll see Bill BRUFORD listed as the drummer. Having played in perhaps more famous prog bands than any other artist, BRUFORD has, at one time or another, kept time for just about every major band in the genre, as well as maintaining a successful solo career.

Beginning his professional career while still in his teens, BRUFORD answered a drummer wanted ad in the Melody Maker and proceeded to join two young men in what he thought was to be 'a vocal group, in the style of The Fifth Dimension'. The two young men were named Chris SQUIRE & Jon ANDERSON, and together they formed the nucleus of what was to become one of the biggest progressive bands of all time, YES. After the worldwide success of their albums "Fragile" & "Close to the Edge", BRUFORD was eager to explore more fertile musical pastures. Leaving a band that was, at that point, poised on the verge of worldwide superstardom was seen by most as misguided at best, insane at worst. BRUFORD, however, felt he had learned all he could from YES, and was looking for a fresh musical environment in which to stretch his wings. He found just such an entity in KING CRIMSON.

After numerous personnel changes over the years, bandleader Robert FRIPP had decided to radically reform KING CRIMSON, and enlisted BRUFORD with the priceless quote "I think you're about ready now, Bill..." For the next two years, BRUFORD and CRIMSON produced some of the most innovative and influential music of the 1970s before FRIPP, in a prescient preemptive response to the growing grandiosity of the genre, once again disbanded the band in 1974. BRUFORD then shifted his time between a variety of projects. In 1977, he joined GENESIS as a touring drummer to allow recently promoted frontman Phil COLLINS to concentrate on vocal duties. The same year, he formed his own eponymous fusion band with Jeff Berlin, Alan HOLDSWORTH, and Dave Stewart. They released a series of fine albums which allowed BRUFORD ample room to explore his love of jazz.

After an aborted attempt at forming a supergroup featuring John WETTON & Rick WAKEMAN, BRUFORD & WETTON then joined forces with Eddie Jobson & Alan HOLDSWORTH to become U.K. The original lineup only lasted for one self-titled album, with HOLDSWORTH and BRUFORD both exiting the band before recording the follow up LP, "Danger Money". BRUFORD re-formed his fusion band for one more album, 1980s Gradually Going Tornado, and joined former YES keyboardist Patrick MORAZ for a pair of albums before rejoining Robert FRIPP in a new, streamlined incarnation of KING CRIMSON in 1981. This lineup released three excellent albums from 1981 to 1984, at which time FRIPP once again pulled the plug on KING CRIMSON until further notice.

The rest of the decade saw BRUFORD rejoin his former YES-mates for the "ABWH" album and tour; a job BRUFORD claims he undertook because he knew if would pay for his new project; an experimental jazz outfit entitled EARTHWORKS. BRUFORD recorded with EARTHWORKS throughout the late 80s & early 90s, until the CRIMSON KING once again reared it's head in 1994. This new 'double-trio' incarnation of the band was a radical change even for KING CRIMSON, and the music it produced was no less radical for it. BRUFORD toured and recorded with KING CRIMSON throughout the rest of the 1990s, before finally abdicating the drum seat to former double-trio co-drummer Pat Mastelotto in 2000. Though he continues to perform & record today, his contributions to some of the genre's greatest works have already cemented his place as one of the great drummers in rock history.


Bill Bruford, the jack of all trades drummer, released his first solo album in 1977. The album featured top echelon musicians in all their respective fields and the result is an incredible explosion of jazz and rock into a combination never seen before. These core musicians, Allan Holdsworth, Jeff Berlin, and Dave Stewart (and of course Bruford himself along with a few other musicians), created highly technical and complicated rhythmic patterns, and yet they also created fun, experimental, off the wall jazz music that any fan of groups like Brand X or Return to Forever will love. There is one fatal flaw to this album, though, and it really hurts the overall experience, but I shall get to that later.
The album opens with a concise and top notch drum beat in Beelzebub, some off the wall marimba percussion and some great start stop bass work from Berlin (as well as some sprawling Holdsworth guitar work). It's a short piece, but it sets the mood for the entire album. Back to the Beginning is where the main flaw of this album is first presented, and that is the vocals of Annette Peacock, who really throws the entire mood off and really is unfitting with her annoying voice. Musically, the song is perfect, but vocally, it's almost unbearable to listen to. Fortunately, though, there aren't that many vocal tracks on the album. Seems Like a Lifetime Ago is a two part piece that begins with some smooth atmospheres and some more vocals from Peacock, who doesn't really butcher the piece, but I'd still prefer an instrumental experience. The second part is a more laid back section, with some dynamic keyboards and some dreamy bell percussion. Add some more great sprawling and off the wall soloing from Holdsworth towards the end you have yourself an excellent piece. Sample and Hold goes through many different moods, from somber and very melodic, to spacey and very groovy, but it holds up very well.

Feels Good to Me begins rather simplistically, but soon enough little complexities and intricacies are introduced. Holdsworth is again at the top of his game with excellent and well timed guitar fills, and Dave Stewart has a nice piano performance towards the end. Either End of August has a nice horn arrangement and a nice hooking bass melodies and leads from Berlin as well as a floating synthesizer lines from Stewart. If You Can't Stand the Heat... is one of my favorite pieces on the album. It begins with a manic vibraphone melody that rises and falls at a rapid pace. Jeff Berlin adds his bit to the piece by playing some out of this world fills between Holdsworth swirling leads. Springtime in Siberia is a somber piano track with some melodic chord sequences from Dave Stewart and a somewhat triumphant horn line, it's not a bad track, but nothing I'd call brilliant. Adios a la Pasada ends the album with more grating vocals from Ann Peacock despite some incredible band performances from Bruford and Berlin, who really are nothing short of an amazing rhythm unit. I'd say of all the Peacock songs on the album, this is the best one, mainly because it doesn't feature much vocal and the musicians are able to spread their wings.

In the end, Feels Good to Me should feel good to most jazz rock enthusiasts and those who are fans of the undeniable drum prowess of Mr. Bruford.
Posted by Zen Archer at 2:25:00 AM