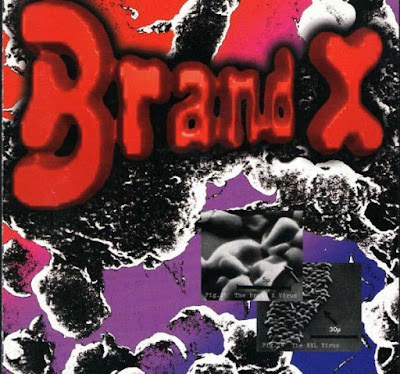 
This is another excellent fusion banquet from the inspired Brand X, certainly in terms of volume of its discography; one of the more successful and prolific acts ever. As the humorous proviso on the back cover "Warning! Highly Contagious" states, this is an infectious virus that has deep burrowing power and wastes no time in setting down to the task of supplying a steady dose of delirium. The opener is a rumbling groove fest, led by the contagious fretless Percy Jones bass, syringed by some deadly drumming and some feverish effusions from guitarist John Goodsall and keyboardist Franz Pusch. "Stellarator" showcases Jones' dripping style, his massive fingers cajoling, twisting and caressing his fabled instrument (an Ibanez fretless), while Marc Wagnon adds a barrage of Midi-vibes and Goodsall some Midi-vapor guitar. Drummer Frank Katz does his finest "boom-boom- tchak" imitations, keeping it all tight and funky. "Virus" starts out like rabid creature, spooky, determined and unrelenting within a highly binary beat, chugging inexorably into maximum acceleration, fluffed with oddball vocal samples, bizarre sonic collages like a lovely "reverse guitar solo" that reeks of Steve Hillage, some jingle, some jangle and weird vocal chanting! Percy Jones' bass retains all my focus, as I choose him to be my sonic conductor and there are few as exhilarating as him! The final segment morphs into out right symphonics , featuring some mellotronish string sweeps that are muscularly propelled by the furious rhythm. "XXL" is Goodsall's moment in the spotlight, a rifferama fest chock full of funk, groove and sass, disgorging a wide variety of tones, from clean rippling chords via some wah-infected stretches to some sitar-sampled forays, again forcefully anchored by some concrete bass and drum foundations. "The Worst Man" has Percy in fine disposition, doing perverse things to that bass, in more than one channel, Goodsall doing Andy Summers guitar imitations (this can sound like an instrumental the Police going prog) , flutist Danny Wilding blowing a few background wisps. The title cut is a traffic-jam improv that has all the lads blasting away uncontrolled, Goodsall and Wagnon flashing the nimble fingers, while the low spark is held masterfully by the high heeled Jones/Katz duo. John in particular unleashes a monstrous solo that sizzles with abandon while Jones gets into a jaw dropping high speed rumbling finale. "Five Drops" is a Wagnon comp that highlights the amazing acoustic guitar skills of Mr.Goodsall (hello Al, John and Paco), awash in a sea of Midi-vibe symphonics that gently flow towards some imaginary jazz-cool atoll, palm trees swaying in the breeze. "Drum Ddu" is a hodge-podge of burping and belching bass, whizzing oasis-borne guitar phrasings, dancing calypso-vibraphones and slap happy percussives, all coalescing in a fusion cocktail that typifies the Brand X style, controlled euphoria with a slight English humorous slant. A total winner that stops on a dime. "Operation Hearts and Minds" is another jubilant Goodsall piece, surely more structured that the preceding maelstrom, within a classic jazz-rock foundation where the guitar wailing mightily as it soars uncannily into the caravanserai-like universe of early Santana. Amazing, I say and certainly a highlight track here! "Mr.Bubble Goes to Hollywood" is a typical Brand X drum solo that pounds, grounds and astounds, both lightning quick and expressive, with that impeccable fretless kicking in, lending support. Some have inquired how can I , the melodious prog romantic be so enamored with Brand X . Well, above all, I consider myself a bass freak, following the magic spell in the lower end with dedicated severity and when one has a Percy Jones as leader, well you can take me to your planet anytime. This edition has 2 hidden bonus tracks featuring the sadly departed drum genius Pierre Moerlen, an occasional friend and amigo of the band, without a doubt a huge talent among a crew of immense abilities. Both tracks stretch well beyond the 8 minute mark, so this just may be the apex, talk about bonus!!!!!
Posted by Zen Archer at 1:00:00 AM