Atomic Rooster
2002
Live at the Marquee 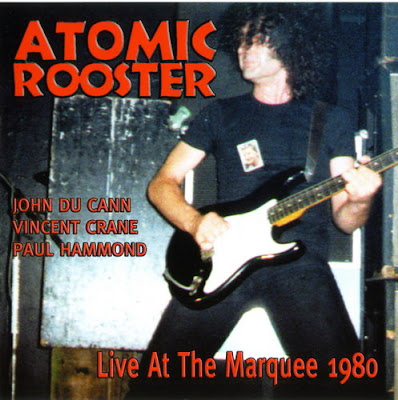 Recorded, as the title makes plain, at London’s Marquee club in 1980, this is an uncompromising portrait of Atomic Rooster at their comeback peak. With the core duo of John du Cann and Vincent Crane recently reunited with classic-era drummer Paul Hammond, this scintillating recording captures the band bathing in the respect and adoration of an entire new generation of fans.

From the set list, “Tomorrow Night” and “Devil’s Answer” in particular draw serious applause. Other Rooster classics, “Death Walks Behind You”, “Gershatser” and “Seven Streets” are similarly well-received, while more recent material slides effortlessly in alongside the oldies.

The result is a far stronger album than devotees of Atomic Rooster’s first incarnation might be expecting, and a far fresher one than their vintage status would have suggested.

The sound quality isn’t great but given the lack of the classic Atomic Rooster live recordings, it can be worth the compromise.
Posted by Zen Archer at 2:11:00 AM