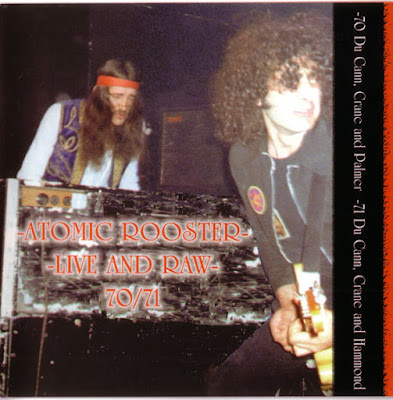 
Live And Raw was released in 2000 by the Angel Air label and presents two BBC sessions 1970 &71 introduced by John Peel. First remark, the sound quality is quite bad : these are not the original BBC masters which doesn't exist anymore, but second or third generation tape transfers....but the rarity and the quality of the material justifies the release! The first four tracks are from a 1970 session still with Carl Palmer and present Atomic Rooster at the peak of their first period with Du Cann and Palmer. The tracks are rougher then on the first record plus a then unreleased Gershatzer and John Du Cann gives the music a harder edge with his guitar playing and singing compared to Nick Graham.The second 1971 session presents material from the second classic record Death Walks Behind You and is eqally good with Paul Hammond on the drum stool.

While the sound quality of this CD may not be the best in the world there are plenty of warnings, both in the title and the booklet. What is important is that the first half of the CD contains four live cuts from the line up which included Carl Palmer on drums, and these are the only live recordings known to exist from that era. Recorded at the Paris Theatre with Mr. John Peel introducing each number, and giving the fans some history, such as the fact that John Du Cann had only been in the band a month. All of these four songs are interesting but to me the highlight must be the instrumental "Gershatser" which contains some great Hammond Organ from Vincent Crane, but also a drum solo from Carl. This is how ELP would have sounded if they had become a hard rock band. By the time that Rooster returned to the Paris Theatre a year later Carl had left to join some other guys, and he was replaced by Paul Hammond. This is a very different sounding band, as John had by now removed a lot of the jazz influences and had made them very much a hard rock band. Of the four songs, one is "Tomorrow Night", which was their second biggest hit.
Posted by Zen Archer at 1:48:00 AM