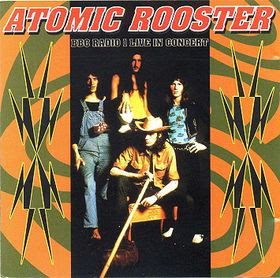 
Being a big Atomic Rooster fan, I was naturally very excited to find out about this album. BBC Radio 1 in Concert perfectly presents the live energy that the band had. With a new guitarist, Steve Bolton, and a new vocalist, Chirs Farlowe (previously of Colosseum), Atomic Rooster were ready to conquer new territories. This is actually my favorite period of the band's career - just after In Hearing Of Atomic Rooster, but with Chris Farlowe onboard. Most of the material comes from the previously mentioned album, but one or two songs are from their proto-metal album, Death Walks Behind You. A really great album and highly recommended for any fan of heavy prog! However, if you would wish to get a real feel for Atomic Rooster's live performance, I would recommend their Beat Club recordings from the same year.

This album represents the live album that the Rooster never recorded. It was recorded with the usual great care of the BBC crew as Rooster just had gotten out their Made In England LP, so logically a good part of this came from that excellent album. A few tracks came out from the In Hearing Of and Farlowe is even better than Pete French on the opening Breakthrough. The only small regret that I have is that the album is so short, but this is minor compared to the sheer quality of this release. This posthumous live album might be the only official live release from their 70's heydays and it is just as essential as the Master From The Vaults DVD release, as they are quite complementary.
Posted by Zen Archer at 1:46:00 AM