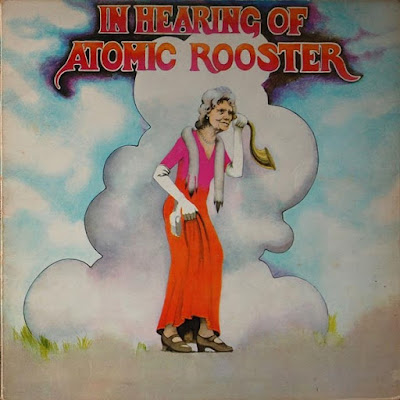 The follow up album to the wonderful, Death Walks Behind You is one that shows Rooster turning in a new direction, and in this transitional stage they've managed to create another killer album. While this one would prove to be not nearly as dark as their previous album, something evident just by looking at the cover art (this is likely one of Roger Dean's strangest creations to date, and is a whole lot more welcoming than the cover to Death Walks Behind You), it still shows Rooster pioneering the genre of heavy prog. Their heavy riffs and piano sections mixed in with sharp vocals (Pete French joins the band at this point to take over vocals from John Cann) make for a mean team and show Atomic Rooster at what was likely the high point of their career.

One of the biggest noticeable differences here is the shift in style. While Death Walks Behind You was rather gloomy with upbeat sections, this album is entirely upbeat with maybe one gloomy moment. The band's funk influences are clearly starting to creep in, although they haven't taken over yet like on the follow up to this album (Made In England), with an instrumental like The Rock utilizing just that top make for a very unique blend of funk, rock and progressive rock. The closing The Price also fits into this category with its underlying organ work and fast drumming. On this album as well, the songs are a lot shorter, more condensed. There's no sprawling 8-minute instrumental, in fact the longest tune on the album just manages to get over 6-minutes. This clearly poses no problems for the boys, however, since the band are able to develop ideas well in a short period of time. Besides, Rooster have never been known for any kind of side-long-suite or the like.

Of course, what we know Rooster best for is blistering tracks that are sure to blow your head clean off - and there's some of those here, of course. One of the biggest things that helps to make this album as good as it is is the fact that it has a lot of tracks that really rock. The heavy piano off the top of Breakthrough establishes that fact immediately as French steps in to deliver his first vocals for the band. Complex pieces of guitar, organ and a wonderful drum beat coming out of the chorus sections make this track one of Rooster's absolute best. To make things better, it's followed up by another classic, Break The Ice. This one is a bit more straightforward than the opener, but it proves as an ample backer. Soft guitar and organ work explodes into a heavy guitar riff and we're on our way. More impressive drum wizardry from Paul Hammond drive the song into its soft entry into the chorus which builds until we're into a yell from French. Very impressive. Head In The Sky is the other pure rocker on the album - but this one likely rocks the hardest. The riff from this one sounds like it's coming from some kind of proto-Max Webster (bonus points if you know who that is!) until Crane's wonderful organ comes in to bring back the Rooster feeling. Hammond's drumming on this one is once more incredibly potent and the vocal melodies from French are just wonderful. It may not be a ''head in the sky'' zoned out space rock song - but it certainly is the kind that will knock your head clean into the sky. Check out that organ solo from Crane in the middle of the song, excellent!

There are some slower moments on the album, but they really slow down the show. On the band's previous album the slower moments were a couple of the most potent, emotional and memorable songs on the album. While Nobody Else (from the previous album) featured a wonderful speed change that made the first half of the song so potent the slower tunes on this album seem to like to stay the same speed. Black Snake is driven by a slow (but still impressive) drum beat and Crane's organ. Unfortunately, for its 6-minute duration it really doesn't pick up and while it is enjoyable thanks to French's vocal style it does slow down the album as it opens side 2. Decision/Indecision is in the same vein, although this one does feature a blistering organ solo in the middle. This one isn't so weak, but after the first two tracks that hit so hard it does seem somewhat out of place.

But what would Rooster be without their instrumentals? On this album were treated to two, the previously mentioned funk-flavored The Rock and the organ-festival that is A Spoonful Of Bromide. Crane really wanted to show off with this track, and it really works. Paul Hammond in the background once again giving the skins the what-for as this one moves on. Another stellar track.

A moment or two that lag but otherwise a very impressive work from the Rooster. Though this would likely be the last time the boys would do so well in the world of prog rock thanks to the funk road they would take by the time their next album would be released. Still, this one stands as a monument to early heavy prog.
Posted by Zen Archer at 1:14:00 AM