Atomic Rooster
1971
Death Walks Behind You 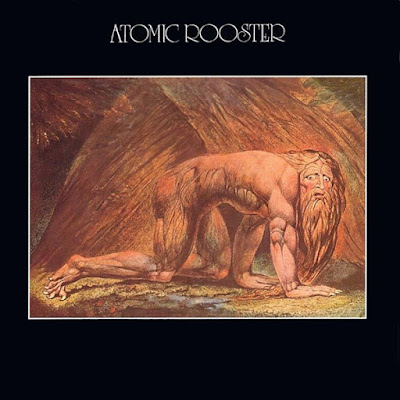 
This classic dark prog album has some very interesting qualities and is very recommendable, but it has also some slightly uninteresting moments included. Like the awesome title track, the end result would have been a bit better in my opinion, if the seven and half-minutes long song would have been shortened to five minutes instead, as the basic blues based theme is being repeated painfully long in the end. Anyway, the eerie opening with the horror-movie pianos and the chromatic verses are really marvelous. The instrumental numbers "VUG" along with the album closer "Gershatzer" have some qualities which make them different from the other songs of this album: I recall Vincent Crane told he thought playing less creates more interesting things than playing much, when his thoughts were asked about the band Emerson, Lake and Palmer, where Atomic Rooster's first drummer Carl Palmer had left. In addition of this approach, these bands differ from their fundamental style, as ELP tried to do more serious elitist art, and Atomic Rooster is more streetwise down to earth band. I like both of them, and maybe an exception makes a rule, and anyway these neurotic sounding instrumental songs are quite good in my opinion. About Vincent's playing, I'll have to give kudos for him playing all the bass parts with his keyboards and pedals. It's really nice that they didn't use a session bassists like The Doors did, making the record capturing totally their own sound and representing them with an authentic way. Also as the third member along with the keyboardist and the drummer isn't a bass player but a guitarist, their sound grows more wide and rawer, mimicking the conventional rock quartet perfectly.
From the other songs of the album, "Tomorrow Night" is a piano driven bluesy tune, which was also filmed to The German Beat Club television show. "7 Streets" follows the hazy echo-treated ending chaos of the previous number, and it begins with a church-music styled organ riff, soon morphing as aggressive rock sequence with characteristic descending melody pairing up with the neat riff. There's also a fine open jam part in the end with nice guitar and keyboard dialogues, before the track ending to a solemn organ chords. Then "Sleeping for Years" starts in similar smashing of the instruments like on Deep Purple's "Speed King", and there are also some other slight similarities in these band's sounds; The same sounding distorted guitar tone accompanied with vintage keyboard sounds and the early 70's blues rock based approach. Atomic Rooster doesn't though have so much macho boasting manners as the compared successful hard rock group did have. Another similarity with the early 1970's artistic hard rock albums are the small comments of each track by Vincent in the album sleeve. "I Can't Take No More" is then a nice groovy rocker sounding quite much Black Widow. "Nobody Else" begins with weird approaching chanting, then first bringing front a jazzy and relaxed piano theme accompanied by subtle guitars and singing. In the middle of the song drums jump in dynamically and the guitar boosts up making a more powerful rock passage inside the tune treating the early themes in a nice way, and making up a good song.

Though this music isn't very elitist, it's still clearly progressive rock with the innovative approach towards rock themes and creating unique realm of feelings. The band has used neatly the William Blake's drawing "Nebuchadnezzar" in the album cover, giving both classic and stylistically correct first impression of this record. If you should like album, check out Black Widow next if you haven't done that yet. Recommended for fans of dark pessimistic music and for those who like raw vintage keyboard drive hard rock of the early 1970's.
Posted by Zen Archer at 1:11:00 AM