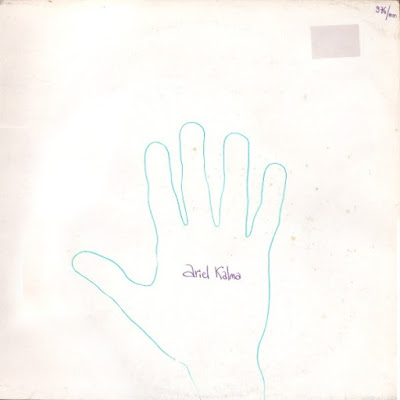 Track B1 is credited as "Back Africa" on the record label.


Ariel Kalma is a prolific composer, multi-instrumentalist, and global traveler whose work ranges from electronic experiments and minimalism to electro-acoustic; ambient electronic to globally tinged new age music.
Kalma was born and raised in Paris where he began studying recorder at the age of nine and saxophone at 15, playing in school bands and rock & roll acts until he attended university, where his taste expanded to avant-garde and free jazz. While studying computer science and playing music in rock clubs he was encouraged by Belgian pop star Salvatore Adamo. After playing in a free jazz duo with a drummer for a time, he formally joined Adamo's road band playing sax and flute (he taught himself to play the latter instrument in a week). During his traveling adventures he met virtuoso Brazilian guitarist Baden Powell and played with him in Germany and later in Paris. When he returned to Paris in 1971, he began experimenting with Revox reel-to-reel tape recorders, delays, and analog loops using organs, poetry, flutes, saxophones, and noise. He hung out in churches, recording their atmospheres and natural sounds.
In early 1974, Kalma joined French pop singer Jacques Higelin's band and began traveling the world. During the nine-month trip, he found himself in an airplane hangar in India during monsoon season; he flipped on his portable tape recorder and claims to have had a "heart-opening" experience. He learned the technique of circular breathing on his travels. When he returned to Paris in 1974, after traveling the long way home, his attitude toward life and music making had changed forever.
He became deeply influenced by composers Terry Riley, LaMonte Young, and Charlemagne Palestine, and the global sounds of the Delhi-based Dagar Brothers of the Dhrupad, as well as their notions of minimal drones -- just intonation and well-tuned instrumentation -- and explored what he heard in these approaches given his own musical background, combining it with his tape recorder experiments. He worked for a time at Pierre Henry's legendary Institut National Audiovisuel, Groupe de Recherches Musicales (INA GRM). It was during this period that he recorded and independently released his debut album, Le Temps des Moissons (The Time of the Harvest), in 1975, selling it from the back of his moped and on consignment to record stores.
Back in Paris, he met Riley and recorded his second album, Osmose, with sculptor and field recorder Richard Tinti, who supplied the composer bird and insect songs from a tropical rainforest. With a sound that walked the line between Eno's ambient music and the then-emerging new age music, Osmose was released in 1978 on France's SFP label.
In 1980, Interfrequence, an album that walked a beautifully loping line between experimental, drone-based music, and new age was released by Editions Montparnasse; it was followed in 1981 by Musique Pour Le Reve et L'Amour, 1984's cassette-only Bindu, and 1989's Serenity.
These early albums were merely Kalma's official output. He made dozens upon dozens of studio recordings that never saw the light of day; each applied a different aspect of his ongoing musical development, his world view, and aspects of his global travels. While his work took on a decidedly new age bent, his experiments with electronic music never ceased. Galactica Electronica, recorded during his '80s space music period, is ample evidence.
Kalma marketed his own recordings throughout the '90s and into the 21st century via his website, labels, and independent distributors. Highlights include Endless Breath and Flute for the Soul. In April 2014, Open Like a Flute, which combined two '80s-era cassette recordings from Montreal, Paris, and Hamburg. It was followed by RVNG Intl.'s collection of early tape recorder pieces, An Evolutionary Music: Original Recordings: 1972-1979, in the fall.


This has been the first solo recording LP from Ariel Kalma, recorded in 1975. After a long journey to India where he learnt the basics of modal music and singing, Ariel was inspired by the fusion of ancient and modern ways of playing music in the 70s with saxophone, ethnic instruments, effects, electric instruments and electronic filters. As making a record was expensive at that time, when the first thousand records were pressed Ariel run out of money so he bought blank sleeves and one by one, he drew the shape of his hand and numbered each LP. This first pressing is now rare and sought after!

Another detail made this LP memorable because it had not been done before: Ariel convinced the pressing engineer to loop the groove at the end of side 2 - thus creating an endless loop - and although it was casually mentioned on the cover, it caused surprises sometimes by sending listeners into trance. or on some occasions burning the motor of their turntable after endless hours! On this CD, Ariel included a loop of several minutes only, because the LP loop had an audio advantage: as time passed the sound of the loop changed because the diamond eroded the groove.

To the 3 compositions originally on the LP have been added 2 other ones from that period of time.
Note from Ariel : Saxophone is powerful. It has raw sounds that are often filtered, polished for easier listening. I like to let my saxophone sing and when I play, I hear high-pitched, teasing sounds that I like so much. they titillate my senses. If it is too sharp for your ears, adjust your EQ till you are comfortable.
Posted by Zen Archer at 7:09:00 PM