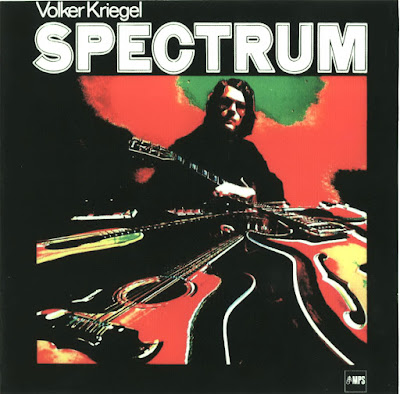 VOLKER KRIEGEL is one of Europe's pioneering Fusion guitarists. During the sixties, he
left his study of sociology and started his music career instead. In 1968 Kriegel
started playing with American vibraphonist Dave Pike and started his first jazz fusion
group, THE MILD MANIAC ORCHESTRA. In 1971 he released his debut, "Spectrum", which is
considered his finest effort and was a milestone in European fusion.
Later he played guitar on two studio albums by the electric violinist Don "Sugar Cane"
Harris, "Keep On Driving" in 1970 and "Sugar Cane's Got The Blues" in 1971. In 1972 he
released hid second solo album "Inside: Missing Link". Two years later he founded
United Jazz and Rock Ensemble, as well as releasing several quality solo albums,
including "Lift" and "Journal". The United Jazz & Rock Ensemble united many of
Europe's excellent musicians, including Kriegel on guitar, providing most of the rock
sound. He played with the band throughout their 2002 farewell tour and died of cancer
in 2003. Aside from his music career, Kriegel was a writer/illustrator. Some of his best known
works include Der Rock 'n' Roll Konig (The Rock 'n' Roll King) and Olaf dem Elch (Olaf
the Moose).

Volker was somewhat of a pioneer in Germany when it came to Fusion. An extraordinary guitarist who on this his debut has surrounded himself with some incredible musicians.Volker also plays sitar on here although there's very little of it on this 1971 release. This isn't the most dynamic album i've ever heard, in fact it's pretty straight forward a lot of the time. We get a percussionist besides the drummer adding lots of intricate sounds.
"Zoom" opens with percussion as the sitar comes in breifly. Drums, bass and electric piano follow.The guitar starts to solo tastefully over the top. Electric piano replaces the guitar 3 1/2 minutes in then the sitar returns.

"So Long, For Now" is laid back and very jazzy. "More About D" opens with some atmosphere. I like the electric piano. It does pick up before 1 1/2 minutes. Nice. Some craziness follows then the bass, drums and guitar lead.The electric piano is back. It settles before 7 minutes and the bass leads.

"Suspicious Child, Growing Up" is a cool song with intricate guitar, electric piano, bass and drums. I like this laid back tune a lot. "Instant Judgement" has some intensity to it and is more uptempo.The guitar leads early then the electric piano leads 2 minutes in.The guitar returns late to lead.

"Ach Kina" is mellow and slow paced. It does pick up some late. "Strings Revisited" has these intricate sounds that come and go. Electric piano leads 2 1/2 minutes in then it's the guitars' turn after 4 minutes. Drums and percussion take their turn after 6 minutes.