The Turtles
1968
Present the Battle of the Bands 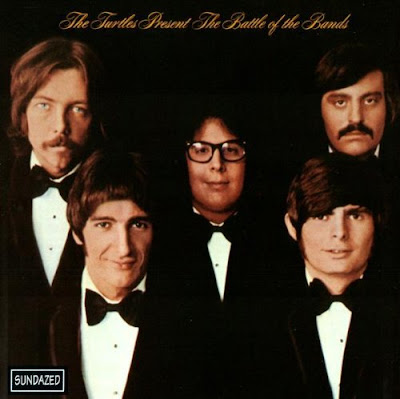 Though the Turtles were rightfully known as an excellent pop/rock singles band, on this recording they let loose their humor, which was part of their act from the beginning. On the outside cover the group is dressed in conservative suits and bow ties, yet on the inside the group is clad in, shall it be tastefully said, less traditional attire. The Turtles (who wrote nine of the 12 songs on the original LP, two songs being added to the CD) basically mock the entire spectrum of music on this album, though elements of their pop/rock sound are contained even in the most country, psychedelic, and R&B elements of the music presented here. Two Top Ten hits are contained in this collection, Roger McGuinn's "You Showed Me" and the Turtles own subtly mocking "Elenore." Light psychedelia meets Booker T. & the MG's in the instrumental "Buzzsaw." The Beach Boys sound shows up in "Surfer Dan," and the original album closer "Earth Anthem" is a hippie ecology, folk-pop anthem that is both very pretty and quite satirical -- a listener could easily lose himself in the fine melody and atmospheric production, while laughing at the same time. The only potential problem with this album is that it is caught in the middle between two extremes: On the one hand, non-mainstream listeners will criticize the album for sounding too commercial, and, on the other, typical Turtles fans will find the album too sophisticated, especially if they are looking for another album like Happy Together. Between these two points of view falls an excellent album that is both commercial and comical, as if both of these elements couldn't coincide in one album.

A Concept Album?
Former Turtle, then-Turtle producer, Chip Douglas was introducing songwriter Harry Nilsson to everyone he knew back in 1967/68. While producing The Monkees’ Headquarters, he brought in Nilsson to play them some of his songs (captured for posterity, HERE) and the Monkees snapped-up “Cuddly Toy” immediately, and even took a stab at Nilsson’s “The Story Of Rock And Roll.” When Douglas took the reigns of his former band’s 4th album, the comically conceptual, The Turtles Present The Battle Of The Bands, Nilsson was there, too. Playing on the sessions and offering the Douglas/Nilsson co-written title track (the album’s concept, as it were) and the 45rpm bonus, “The Story Of Rock And Roll.” After the success of “Happy Together,” The Turtles thought they could do whatever they damn well pleased, so they put together this cheeky mash-up of the history of modern pop (up ’til 1968, anyway), as they donned costumes and monikers for these loving smack-downs of mindless surf rock (The Crossfires), country music (Quad City Ramblers) and lite psychedelia (The Atomic Enchilada). Mixed in with the irreverent look at the music of the music business (and their own past) were two more of the glorious singles that have helped to keep The Turtles’ memory valid… the Top 40 hit, “Eleanor,” and the beautifully arranged McGuinn/Clark composition, “You Showed Me.” This album, more than anything they did early on, is a blueprint for what Mark Volman & Howard Kaylan – via Flo and Eddie – would later become; unapologetic gagsters with enough chops to pull off moments of pop excellence when the inspiration hit them.
Posted by Zen Archer at 2:26:00 AM