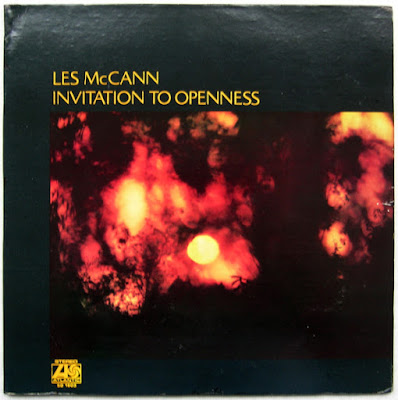 
Les McCann reached the peak of his career at the 1969 Montreux Jazz Festival, recording "Compared to What" and "Cold Duck Time" for Atlantic (Swiss Movement) with Eddie Harris and Benny Bailey. Although he has done some worthwhile work since then, much of it has been anticlimactic.
McCann first gained some fame in 1956 when he won a talent contest in the Navy as a singer that resulted in an appearance on television on The Ed Sullivan Show. After being discharged, he formed a trio in Los Angeles. McCann turned down an invitation to join the Cannonball Adderley Quintet so he could work on his own music. He signed a contract with Pacific Jazz and in 1960 gained some fame with his albums Les McCann Plays the Truth and The Shout. His soulful, funk style on piano was influential and McCann's singing was largely secondary until the mid-'60s. He recorded many albums for Pacific Jazz during 1960-1964, mostly with his trio but also featuring Ben Webster, Richard "Groove" Holmes, Blue Mitchell, Stanley Turrentine, Joe Pass, the Jazz Crusaders, and the Gerald Wilson Orchestra.

McCann switched to Limelight during 1965-1967 and then signed with Atlantic in 1968. After the success of Swiss Movement, McCann emphasized his singing at the expense of his playing and he began to utilize electric keyboards, notably on 1972's Layers. His recordings became less interesting to traditional jazz fans from that point on, and after his Atlantic contract ran out in 1976, McCann appeared on records much less often. However, he stayed popular and a 1994 reunion tour with Eddie Harris was quite successful. A mid-'90s stroke put him out of action for a time and weakened his keyboard playing (his band began carrying an additional keyboardist) but Les McCann returned to a more active schedule during 1996 and was still a powerful singer. His comeback was solidified by 2002's Pump It Up, a guest-heavy celebration of funk and jazz released on ESC Records.

“The Lovers” is both central to the free-form spirit of 1972’s Invitation to Openness, and to understanding Les McCann’s little-heard ability to blend deep soul and outside concepts. Completely improvised, the track works as an extended, 26-minute argument for something McCann didn’t do nearly enough: Use his typically overlooked second career at the electric piano to race toward jazz’s frontiers.

Les McCann had risen to fame, of course, in an acoustic jazz trio setting, playing R&B-drenched music as it had been played forever. His early apex happened with the 1969 smash Swiss Movement (featuring Eddie Harris, and the ageless “Compared to What”), followed with the sequel Second Movement. By the turn of the ’70s, however, Les McCann had become enamored with the day’s emerging mainstream soul sounds, principally that of the electric piano.

McCann then assembled a 13-member group to improvise for producer Joel Dorn around a few loose themes, very much in the style of Miles Davis’ contemporaneous recordings, and with a similarly talented all-star cast. The lineup of five percussionists on Invitation to Openness included Ralph McDonald and Bernard Purdie. Guitarist Cornell Dupree could be found tangling with multi-talented David Spinozza — just as the latter was rising to fame for his work with Paul McCartney on Ram. Yusef Lateef, Alphonse Mouzon and regular McCann contributors Jimmy Rowser and Donald Dean were also on hand.

There was nothing more to it, really. No charts, no complex instructions beyond a wink or a nod. They gathered inside Atlantic’s studios at 60th and Broadway, and began to build a masterpiece around Les McCann’s main voice. With no rules, everything was on the table. “The Lovers” even includes shimmering harp work by Corky Hale, adding another exotic element to this indescribably unique triumph.

“The Lovers” initially took up all of Side 1 on Invitation to Openness, which has been newly reissued by Omnivore with the addition of a live take on Les McCann’s signature “Compared to What.” He rounded out the original release with two other cuts, “Breaux J. Poo Boo” (an electrified update of a track from McCann’s earlier Limelight) and “Poo Pye McGoochie” (featuring these funky, funky asides from Lateef, who sets his flute down for a turn on tenor). But Invitation to Openness had already made its mark.

“The Lovers” is the sound of someone loosing himself from the bonds of expectation, and certainly from the oft-staid strictures of soul jazz — which too often settles for groove instead of searching for meaning. Les McCann managed, for a fizzy half hour or so, to combine these two disparate impulses. It was music that moved both your hips and heart.

Invitation to Openness is proof of the massive influence that Miles Davis' album In a Silent Way had on the development of electric Jazz.

In a similar vein as Donald Byrd's Electric Byrd, and as Julian Priester's Love, Love, Invitation to Openness feeds on the modal basis laid down by the tight grooves of the band, the clock-like ticking of the drums, and the psychedelic effects of the electric instruments, upon which individual members of the band stretch out soloing. On Poo Pye McGoochie (and his friends), Alphonse Mouzon finds a slot for a drum solo. Throughout, a lot of the fascination is caused by the double cast - two guitarists, two bass players, two drummers, plus percussion.

The Lovers fills all of the record's Side One. A meditative, intro with a slightly psychedelic effect enhanced by Corky Hale's harp leads to a modal riff, which is sustained throughout the 26 minute long piece. Before you know it, the riff turns funky, and Yusef Lateef introduces an anthem-like Arabian influenced theme on the oboe - by which time you might already be dancing to this One-Thousand-and-One-Nights trip. Fabulous!

Beaux J. Poo Boo starts with a churchy riff. Later on in the tune, the band turns the beat into something similar to Cocinando on Ray Barretto's Que viva la música. The drummers keep that pulse-like beat throughout - think of Tony Williams' trend setting drums on In a Silent Way.

The lineup includes, among others, David Spinozza,Yusef Lateef, Cornell Dupree, Alphonse Mouzon, Bernard Purdie, Ralph MacDonald, Buck Clarke, William Clarke, Jimmy Rowser, and Bill Salter. Les himself proves to be one of the leading e-pianists of the Electric Jazz period here, and among those, he's the one who's most rooted in the Blues.

Invitation to Openness is one of the great and important albums from the Electric Jazz fusion period and as far as I'm concerned, Les McCann's coup de maître.
Posted by Zen Archer at 3:11:00 AM