John Mayall
1971
Back To The Roots 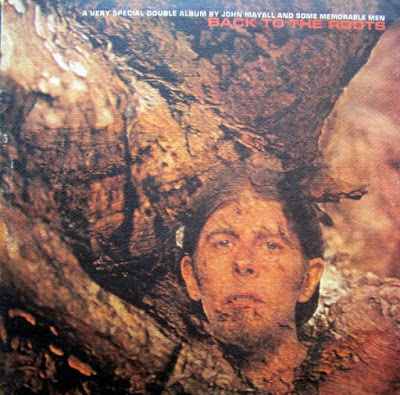 It's a sign of either how far downhill music has gone in 30 years, or how underrated he was as a singer in the first place, but John Mayall's voice comes off extremely well in this long-delayed CD reissue of Back to the Roots. The original double-LP set was an immediate favorite with Mayall fans, a relatively small but hardy bunch scattered around the globe — but Polydor in the U.S., apparently anticipating a lot of demand (probably owing to the presence on the album of Eric Clapton and Mick Taylor, then in the first flush of major stardom as a full-fledged member of the Rolling Stones, who had just reached the pinnacle of their careers as well), pressed far too many copies. The result was that it became a perennial in cut-out bins for years afterward. Ironically, it was that availability, at $1.99 to $3.99 in the early '70s — which did nothing for Mayall's or Polydor's respective ledger sheets — that turned Back to the Roots into the second-most-common way for prospective fans to discover the man's music (the most common was — and likely always will be — Bluesbreakers with Eric Clapton). The recording at hand holds up extremely well on CD, and not only because Mayall's voice seems more appealing today than it did in 1971. At least in the U.S., the original release always seemed to suffer from cheap, noisy pressings, which detracted from the subtlety of the playing; and depend upon in, on tracks like "Accidental Suicide," which featured Clapton, Taylor, and Harvey Mandel on lead guitar (not to mention Mayall on rhythm guitar), there were lots of subtleties to appreciate. And the remastering does add some measure of richness and expressiveness to Mayall's singing that wasn't as evident in 1971 — with Johnny Almond on sax and flute and Sugarcane Harris on violin, this is practically a super-session recording. The producers have also thrown on eight of Mayall's 1988-vintage remixes from his reshaped/remastered reissue, Archives to Eighties. Those are generally cleaner and slicker, and come off here as though they were conceived with a smooth sound, if not digital playback's clarity, in mind. They're less interesting than the originals, if only because they're more calculated in what they're doing — the original sessions were spontaneous music-making, whereas this was Mayall updating a legacy 17 years or so later; but they're a welcome addition, as they now share space with the originals rather than supplanting them. The original booklet has been re-created for this CD, which also reprints Mayall's notes from Archives to Eighties, explaining the latter album's origins.
Posted by Zen Archer at 8:30:00 PM