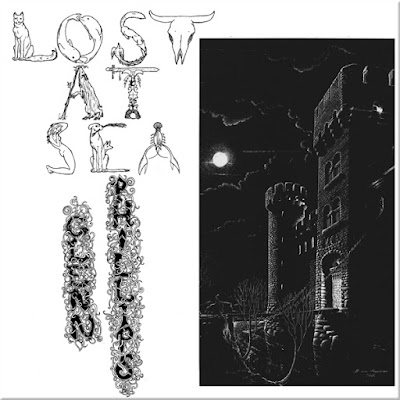 Born in 1950, American guitarist Glenn Phillips became known for his work with the Hampton Grease Band, of which he was an original member from late-60's to early-70's.After the band's dissolution in 1973 he started a solo career and in 1975 he recorded his debut and most proggy album ''Lost at sea'' at his homestudio, an album he launched on his own Snow Star Records.The line-up of his backing group included former Hampton Grease Band members Jerry Fields and Mike Holbrook on percussion and drums respectively, Bill Rea on acoustic guitar, John Carr Harrtman on cello, Sant Ram Singh on piano, marimba and vibraphone and Jimmy Presmanes on drums.

Phillips' debut was primarly a Prog/Jazz Fusion album with some early-70's psychedelic touches, pretty guitar-oriented and containing some SANTANA overtones.A very short album, under 30 minutes long, this one is based on Singh's and Phillips' interactions on guitars, vibraphone and electric piano, revealing a jazzy taste here and there with some interesting melodies and solos thrown in for good measure.Phillips had been described as a unique, talented composer and guitarist at the time and the album is quite a proof.His love for atmospheric and well-crafted instrumental music and his flawless plays are a real achievement, there seems to be though a tendency towards experimental, jazzy deliveries in some tracks, which soon fade for the sake of guitar and piano solos.''Lost at sea'' kind of reminds me of New Zealanders LIVING FORCE only recorded document, this one sounds like a less aggressive and dense version of that work.Cello and acoustic guitar in a few tracks come as accurate and challenging additions, the priority though is Phillips' guitar hooks and moves, while his intense riffs, although sporadic, are quite charming as well.

Phillips continued to make solo albums and most of the members here accompanied him in his updated version of Glenn Phillips Band.His music remained heavily guitar-oriented and these works might be good additions for all guitar newcomers.