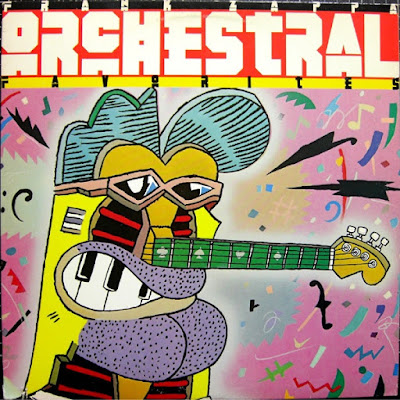 The vinyl is reputed to sound better than the CD, but the CD isn't terribly different; however, it has a reversed stereo spectrum. All CDs are the same.

One of the most fascinating things for me about Frank Zappa is his love of writing contemporary classical pieces (given his own flare, which was influenced greatly by Edgar Varese). This is the first album to really show those sentiments. Along with the Abnuceals Emuukha Electric Orchestra and two of his cohorts in Terry Bozzio and Dave Parlato (on drums and bass respectively), Zappa took pieces ranging mostly from the era of 67-72, throwing in two newer pieces for good measure. You might notice as well that some of these songs were originally on the Lather project, albeit in a slightly altered and edited form that makes them different from their counterparts of that misunderstood project.
The album opens with the finale to 200 Motels, the epic Strictly Genteel, which has always been a favorite of mine in Zappa's catalogue and a rarity amongst his other pieces (it rarely got played live, except for the final 1988 tour). The rendition presented here is very faithful to the original version released nearly 8 years prior, yet it has the same magic that the original captured. Pedro's Dowry is probably the weakest piece on the album, but that doesn't by any means mean that it's poor in quality, it fails to captivate me like Strictly Genteel did.

Naval Aviation in Art? is the shortest piece here, and arguably one of the strongest with it's intriguing melody and it's dynamic performances on all fronts. Duke of Prunes is a re-worked piece from the Absolutely Free album. It's short, to the point, and maintains most of what the original piece was looking for on the musical front. The album closes with another 200 Motels theme in Bogus Pomp. While the song would be fleshed out even more when Zappa collaborated with the London Symphony Orchestra, this version is pretty solid with it's even playing from everyone (and the steady rhythm unit of Bozzio and Parlato keeping it all together).

For the most part I can really only recommend it for the fans of FZ's classical excursions and those who like to see all that FZ can do. It's a very good album, but nothing I can really dub essential. Despite that, there are some really good renditions of classic pieces that fans of early incarnations of FZ will probably enjoy immensely. I leave the purchase of this album up to you.
Posted by Zen Archer at 2:04:00 PM