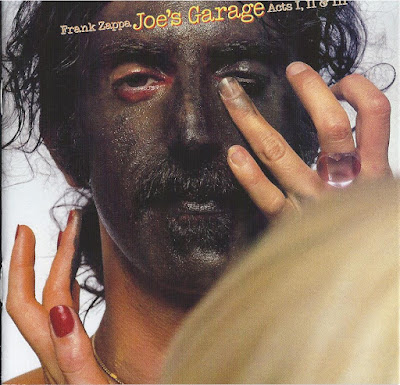 
On the vinyl, the tracks "Wet T-Shirt Nite" & "Toad-O-Line" were retitled "Fembot In A Wet T-Shirt" & "On The Bus" respectively, by the time this work reached CD sets. "Scrutinizer Postlude" was added too.


Frank Zappa's stab at a concept album is strikingly crude and unusual when compared to his other works. It is very guitar oriented and features some of his best solos, it has his most straightforward and rough lyrics, and some of the weirdest dialogue/storylines that I've ever come across. Taking in the form of a 3 act Opera of sorts, Joe's Garage really is a telling of a youth who gets caught up in Rock and Roll and eventually loses everything he has. The Central Scrutinizer (voiced by Zappa) tells the tale of young Joe, from his humble days in the garage, to the final days at the Utility Muffin Research Kitchen. Featuring a plethora of guest musicians and vocalists, one cannot help but feel a bit overwhelmed at the virtuosity of this album. From Vinnie Colaiuta to Tommy Mars, all the Zappa elite are here and give top notch performances.
From the opening distorted voice of the Central Scrutinizer, to the arena rock-esque Why Does it Hurt When I Pee?, Frank really pulls out all the stops on this album. Act 1 is a magnificent effort that goes through all the classic Zappa forms, complicated time signatures, complex chords and progressions, operatic yet subtle vocals, and wicked and searing guitar solos. It almost seems too guitar oriented for Zappa. The highlights of the first Act are the single Catholic Girls, which has Zappa at his tackiest lyrically and a catchy riff, Joe's Garage, with great vocals and guitar play, and Why Does it Hurt When I Pee? for sheer bluntness and comedy.

Overall, Act 1 is a great opening to the Joe's Garage saga. More was to come in Acts II and III, but are they up to par with Act I? Act I itself is brilliant, and it really acts as a great prelude to Acts II and III.

The stunning middle and conclusion to Frank Zappa's epic Joe's Garage series is a lot like Act I. Very guitar oriented, very blunt and to the point, and very technically complicated. From the 5/4 sections of Keep it Greasey, to the blistering guitar solo of Watermelon in Easter Hay, Acts II and III do not disappoint. Frank Zappa keeps the same crew of personnel this time around, but now has Terry Bozzio in on drums as well as Vinnie Colaiuta. Spot on performances and spot on vocals are highlights of this part of the story.
The Central Scrutinizer continues the tale in this section of the story, in which Joe is now in prison doing work to get by without getting sexually assaulted. Soon he imagines his own song, and then laments over the decisions he has made in life. Finally, he is released and decides to work in the Utility Muffin Research Kitchen. Highlight tracks are Packard Goose, which has an outstanding vocal line, great guitar and bass play, and some awesome alternating time signatures during the verses. Watermelon in Easter Hay is a guitarist's dream, a 9 minute guitar solo that goes through all the motions, evolving and unevolving into a brilliant and emotional piece of work. And the finale, Little Green Rosetta, with its party atmosphere and a great ramble in the middle from Uncle Frank himself.

Overall, I feel that not only does this album surpass Act I, it totally exceeded my expectations of what Frank Zappa could do with his music. This is a masterpiece of an album in my opinion, and no one should miss it. It might not be everyone's cup of tea, and some might find it too crude to listen to, but to me it cannot get any better than Joe's Garage Acts II and III