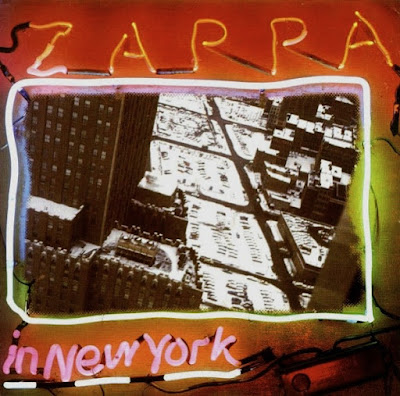 In 1976 Zappa put on three sold-out shows in New York using his lineup as well as some local talent. The result is one of the best live albums in prog and a stunning, not to mention hilarious, display of skill. Considering how Zappa hired some people when he arrived, it's astounding how well this group gels. You'd be hard pressed to find another incarnation of Zappa's troupe that feed off one another like this merry band. Ruth Underwood, new talent Ray White (who provides the excellent vocals for "The Illinois Enema Bandit"), keyboardist Eddie Jobson, and, of course, drum god Terry Bozzio. Bozzio is the most unique drummer of all time. Question that if you want, but he is. I've never heard anyone that reminds me of him. He also brings his own twisted sense of humor to the fold, which probably explains why Zappa used him so often.
Nearly every song is a highlight. The album opens with "Titties and Beer," a take on the standard selling one's soul to the devil story involving the protagonist bickering with the devil, who ate the man's well-endowed girlfriend and his case of beer. The improvised dialogue between Frank and Terry (the devil) is some of the funniest dialogue you'll ever hear, and when a member of the crowd makes Frank read her note on stage, I lost it. I love the drum rhythm, but this song is primarily driven by the argument. The tastefully named "I Promise Not to Come In Your Mouth" lets Jobson display his considerable keyboard skills. "Cruisin' For Burgers" is a superb instrumental that shows every member of the band off. "Punky's Whips" attacks the sexual ambiguity of glam rockers, with Terry Bozzio pining for the affections of Angel guitarist Punky Meadows. This is the second funniest song on the album next to the opener. "The Illinois Enema Bandit" combines soulful blues with lyrics that probably shouldn't be sung in soulful blues. This one deals with a criminal who takes young coeds and, well, you can guess. At his trial, his "victims" come to his defense, saying how pleasurable the experience was. Songs like this prove that Frank Zappa is the antithesis to Barry White lyrically. It features Don Pardo (Saturady Night Live's announcer) offering mock-serious narration "The Black Page Drum Solo" is the best showcase of Terry's immense skills as a drummer. The song got it's name because, when scored, the song has so many notes the sheet looks black. I can't imagine how big Terry's kit was to incorporate all of the percussion you hear. "The Black Page #2" is the "simpler" version for the whole band, and it's a killer instrumental. Zappa plays what could generously be called his "hits" with "I'm the Slime" (aided by Don Pardo) and "Big Leg Emma." "The Torure Never Stops" and "The Purple Lagoon" close the album with extended jams that show how well this lineup plays together.

If you are a fan of Zappa, get this. Now. It's his best and most cohesive live album (the You Can't Do That On Stage Anymore series has some better performances but the albums are choppy since they are taken from different shows with different lineups). This album still makes me howl with laughter.