Frank Zappa
1975
One Size Fits All 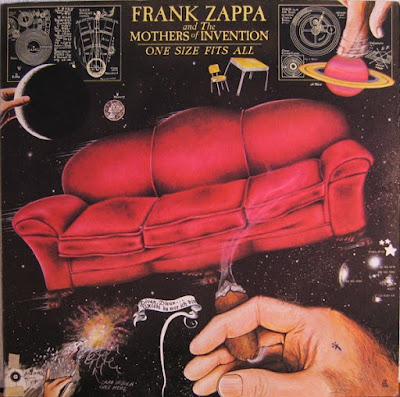 Frank Zappa's 1975 studio affair would feature his jazz and blues sensibilities coming to an apex, with both styles being intertwined and mingled together. The album, One Size Fits all, would also along with Bongo Fury, would be the last official Mothers album, although the members of the group did stay with Zappa for the next few albums. This album actually features some of Zappa's most infamous compositiions as well as ones that would remain in his repetoir and were played live for years to come (especially during the epic 1988 tour). The entire Roxy & Elsewhere lineup is present for this album, and if you haven't listened to that album, it's a phenomenal live album that competes with some of Zappa's best albums in terms of greatness. So what you can expect here is a tight and cohesive band playing some great complicated and "sophisticated" rock/jazz/blues.
The album opens with the infamous Inca Roads, with the catchy marimba line and the consistent bass/drum interplay. The song has a definite Sci-Fi from the 50s vibe with the underlying sound effects. The interplay with the vocals is also fantastic and Zappa's guitar solo is fantastic. The song has many tempo and time changes, most of them come out of left field and it just kicks the complex nature of the piece up a notch. If you're looking for one of the best Zappa pieces ever, look no further. Can't Afford No Shoes is a rockier piece with some great vocals from Duke and Murphy Brock. It's a silly piece (and later part of the vocals would find their way in backward form onto Ya Honza, but I might be wrong on that). Sofa No. 1 and its counterpart Sofa No. 2 are two of the prettiest songs Zappa wrote, the first part being a strict instrumental with a great piano motif and a superb overall progression. It doesn't do anything but bring a smile to my face listening tot his song.

Po-Jama People begins with a magnificent Zappa guitar breakdown before settling in on a main theme, with some vocals from Zappa that invoke memories of I Am the Slime off of Over-Nite Sensation. The vocals on this track are generally very silly, but musically this track is anything but silly. The interplay between Fowler and Thompson on bass and drums is also great as they were one of the more cohesive rhythm units with Zappa (along with the stellar Bozzio/O'Hearn and Wackerman/Thunes units). Florentine Pogen to me invokes memories of Penguin in Bondage off of Roxy & Elsewhere, don't ask me why, though. It has a great riff and feel to it and Murphy Brock's sax and vocals are superb as well (and Chester Thompson is superb on this song behind the kit). Evelyn, a Modified Dog is a throwaway piece but it is short and not really that bothersome. It's an unfitting piano/vocal track that throws off the mood for the most part.

San Ber'dino is a fantastic track about the city of San Bernadino, California, and about a man named Bobby whose head looks like a potato. The musicianship ranges from blues overtones to jazzier instrumental sections. Zappa is superb on this track, providing riff after riff and solo after solo of just biting energy, and Chester Thompson and Tom Fowler are great on the rhythm unit. The vocals are superb as well, with everyone offering their voice to create a fuller and varied vocal sound (kudos go to the outro vocal performance, which gives the song an even more bluesy feel). Probably my favorite track on the album behind Inca Roads. Andy has a bluesy feel and some fuzzy and biting Zappa guitar as well as some nice percussion from Ruth Underwood and George Duke is incredible on this track with a nice piano solo in the middle. Sofa No. 2 ends the album in a manner much like Sofa No. 1. Where the first one was an instrumental this one has some lyrics and vocals, which if you weren't paying attention would sound heartfelt and like a ballad, but upon investigation you can tell it really isn't. I still say musicially this song is a masterpiece, and can do nothing but bring a smile to my face. It ends the album perfectly, in my opinion.

Overall, the final official studio album for the Mother's of Invention would prove to be one of their absolute best. Fans of the jazzier side of Zappa will find something to enjoy here, and the fans of the bluesy and more rocking Zappa will also find something to enjoy here. Me? Since I enjoy essentially all eras of Zappa I immediately enjoyed this album. This is one of the great Zappa albums, and it is a masterpiece in my eyes

The Au20 CD and 2012 CD match the original vinyl; all other CDs use the "Old Masters" version of the album with additional reverb.
Posted by Zen Archer at 11:21:00 AM