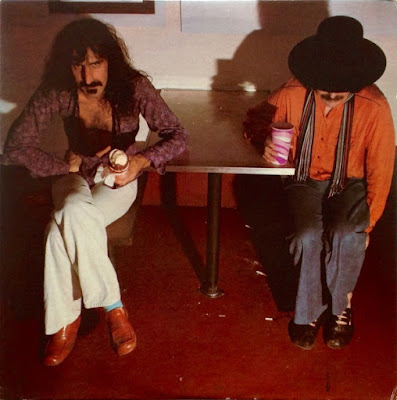 
Frank Zappa and Captain Beefheart (aka Don Van Vliet) had been friends since their early days at Antelope Valley High School (they became friends in 1958). Beefheart's entire career can be attributed to Zappa in two ways: the first is that Zappa essentially forced Beefheart into singing, and that Zappa produced Beefheart's "masterpiece" in Trout Mask Replica. In 1975, Frank Zappa decided to start another project with his old friend in Vliet and in that feeling came the Bongo Fury tour and this album. You'd expect from a Zappa/Beefheart collaboration that they'd do something totally out there, but this album is somewhat subdued from the crazy avant-garde stylings that we know both of these artists were capable of. What you'll find here is a more blues oriented affair with many vocal introductions and bits from Beefheart and Zappa as well as a more humorous approach, perhaps more humorous than Zappa at that time. What can be seen for certain, though, is that this would be Beefheart's last great album and his last true moment in the spotlight before leaving music all together.
From the get go in Debra Kadabra you can here the bluesier influence on the sound, as it is very raw and earthbound rather than over the top like we've come to know as Zappa's style (in a way, that is). Beefheart's jagged and rough vocals never sounded better and the backing band (which consisted of members such as George Duke and Terry Bozzio) is great at the more simplistic approach to the sound. Zappa's style on this album can be seen as a strict blues player, as well, providing the basic riffs and ideas for pieces before really going off on a tangent with his guitar solos. Carolina Hardcore Ecstacy is a bit of an anthem type piece with an epic chorus and some great vocals from Beefheart as well as a superb Zappa solo in the middle. Despite this being a live album, there are two studio tracks to be found in the middle with 200 Years Old and Cucamonga (a reference to a town where Zappa lived when he was a youth). Both tracks arent bad, but there's something left to be desired with them.

Advance Romance is the epic of the album, an 11 minute piece with a rollicking instrumental section and some great (I mean GREAT) Zappa soloing on top, as well as some great rhythmic work from Bozzio and Tom Fowler (who's one of the more underrated Zappa bassists, in my opinion). I forgot to mention that there are two Beefheart written compositions on this album, the first being Sam With the Showing Scalp Flat Top, which is more like a song that could be found on Trout Mask Replica. So what you should expect is zany blues riffing that is more atonal than anything and some wild vocals on top of it. The second is the prelude to the ending of the album, Man With the Woman Head. This piece is mainly a vocal monologue from Beefheart and ranges into the territory that Beefheart is known for (and very adept at, which is totally abstract). The album ends with the best song on the album (and a Zappa classic) in Muffin Man. The toy piano and the vocal introduction by Zappa (probably one of the best introductions of this nature he ever did) are coupled perfectly with the epic solo section, which takes up most of the track itself. It ends the album on a high note, because as I said, it is the best song on the album.

In the end, the final collaboration between the two long time friends Frank Zappa and Don Van Vliet would prove to be a strong effort, ranging into the repetoir and the skills of both musicians. That said, the two studio tracks are a bit of a disappointment, but they make up a small amount of the album. The rest, though, is pretty solid and fun material to listen to and if you're looking for a good mid-70s Zappa album, you can't go wrong with this one.

All pre-2012 CDs suffer from a lousy digital transfer (dig that dropout at the beginning of "Debra Kedabra"), along with added digital reverb and what sounds like a halfhearted attempt at fake-stereo processing--bass on left, treble on right. The 1995 CD has some restored cover/booklet artwork that wasn't on the original CD. The 2012 is grand and sounds almost exactly like the vinyl.Frank Zappa - 1975 - Bongo Fury
Posted by Zen Archer at 11:30:00 AM