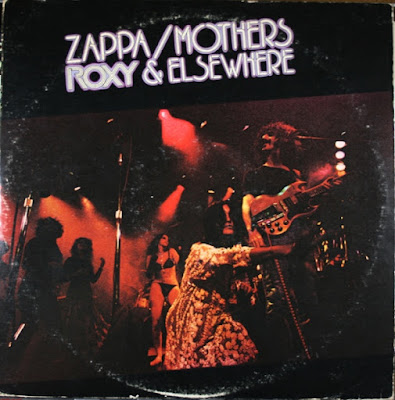 The original BP/Zappa Records CDs seem to be like the vinyl, but some later CDs--including, just to make life difficult, some copies of the Barking Pumpkin disc--have a different mix of "Cheepnis." The 1995 and 2012 discs have restored cover/booklet artwork, but are otherwise identical to earlier discs and each other.

Zappa's 73/74 touring band was one of the best lineups he ever conceived. It had a strong musical sense and there were some wicked funny bits in the middle. On top of all that, this mostly instrumental unit was able to create fascinating jazz-rock music and even stray into other more exciting territories. The ultimate realization of this touring band came full circle in the live album Roxy & Elsewhere (recorded at the Roxy in LA). Zappa is also at this best in the guitar sense, with his ripping and insane solos being on display is many parts of the album, but it's not just Zappa who get a turn in the spotlight. Everyone gets a little spot to shine, from George Duke's scat sections in Be-Bop Tango to Napoleon Murphy Brock's various saxophone solos and incredible vocal sections. In the end, while not as good as One Size Fits All is fares better than the previous album Over-Nite Sensation and better than the next album Apostrophe (').
It all begins with the infamous Penguin in Bondage. The introduction for it has Zappa speaking in dense language, but the song picks up nicely with a fun laid back feel, with little manic fills here and there (the horns are great on this track). Zappa's first of many solos proves to be one of his best, with his watery sound effect complimented perfectly with the electric piano work of George Duke. A great opening if you ask me. Pygmy Twylyte has some nice vibe work from Ruth Underwood and a strong drum performance from Chester Thompson as well as some interesting horn sections. It segues into Dummy Up. It begins with a superb vocal performance from Napoleon Murphy Brock and some funky work from Duke and Tom Fowler. The vocal interplay between Brock and Jeff Simmons is hilarious, and Zappa's narrations between the dialogue is just as funny (he even alludes to his brother, Carl). Village of the Sun begins with an introduction from Zappa, discussing the meaning of the song (about a place full of turkey farms near where he used to live). The percussion from Ruth Underwood is great and the drumming and horn sections are great. Echidna's Arf (Of You) rounds out the first half of the album with some great unison horn/percussion lines (as well as unison keyboard/guitar lines) and a walking bass line as well as some great keyboard work from Duke (on clavinet if I'm not mistaken). This track also has some superb Zappa guitar work, and the feel overall is magnificent. This is the first instrumental of the album and it's one of the best.

Don't You Ever Wash That Thing? begins the second half with some superb start/stop riffs and themes, it's actually quite incredible how tight the group is during the complex sections like these. Walt Fowler gets a nice trumpet solo as well in the beginning until around the third minute. At this time, Zappa comes in with a monologue talking about Ruth Underwood (followed shortly by a George Duke keyboard solo and some more incredible musicianship, including a short but sweet Chester Thompson drum solo). This track is quite amazing with the entire group going through riff after riff of technical and complex music and it keeps my attention throughout the entire 10 minutes that it is (especially during Zappa's solo). Cheepnis follows with an opening introduction talking about cheap monster movies before the entire group kicks in with a strong opening riff and some nice bass work from Tom Fowler as well as some intuitive drumming from Thompson. Not the best track on the album, but a fun one to say the least. Son of Orange County begins with a watery guitar introducing the main theme with a nice underlying drum beat and keyboard motif. Towards the end Zappa yields a fantastic guitar solo that makes good use of different effects and is very fitting with the piece.

More Trouble Everyday is a song that was on the first Mothers of Invention album Freak Out!, it has some nice vocals and some truthful lyrics from Zappa. Zappa's solo is great and George Duke is superb on this track in terms of his keyboard performance. The album ends with the fantastic Be-Bop Tango (Of the Old Jazzmen's Church), a 16 minute piece that includes everything from Jazz-Rock passages to George Duke providing some scat vocals while he performs a keyboard solo (a hilarious combination). Zappa also brings up that there will be dancing during the song and his vocals throughout are nothing short of hilarious. Zappa actually makes many vocal entrances before a big part or a dynamic of the song is changed. Musically, this song is superb, with everybody getting a chance to show their skills. Special mentions go to Ruth Underwood and Chester Thompson (as well as a superb performance from Tom Fowler on the bass), who provide a great foundation on the drums and percussion. The horns on this song are also great, with Bruce and Walt Fowler (on trumpet and trombone) getting plenty of solos and moments where they are just superb. In all, it ends the album with a masterpiece of a song. But is the album a masterpiece?

So, is Roxy & Elsewhere a masterpiece? In my opnion it is very very close to being one. Zappa's output from 1972-1975 was a magical time that saw the light of many many great albums, this being one of them. You can't go wrong with this one, as it has all the flare and fun as well as incredible musicianship and superb arrangements.
Posted by Zen Archer at 10:53:00 AM