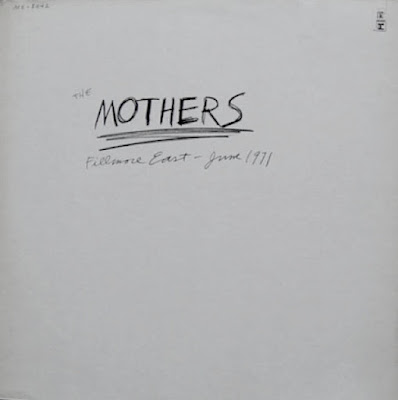 The track "Willie The Pimp Part Two", on early vinyl, does not appear on later CD releases.

Some 'conceptual continuity':-
"The Mud Shark" track; 'Back-story' can be found on Playground Psychotics or RykoDisc compilation Cheap Thrills, as "The Mudshark Interview".
"Willie The Pimp" track: A version first appeared on Hot Rats 1969.
"Peaches En Regalia" track: A version first appeared on "Hot Rats" and singles in 1970 & later in 1995.
"Happy Together" track: Kaylan, Volman & Pons feature in a 'hit record' parody of themselves; See The Turtles
Addenda: John Lennon/Yoko Ono performed with The Mothers at this concert. See Tracks 2.3 to 2.6; Some Time In New York City (The "Fillmore East - June 1971" sleeve image is reproduced for its Disc 2, with red ink doodlings on it by John Lennon).

Here's the album where ZAPPA went for penis jokes instead. He recruited three ex- Turtles (Howard Kaylan and Mark Volkman, aka. Flo & Eddie, and Jim Pons). Ian Underwood and Don Preston from the original MOTHERS stayed on, and British session drummer Aynsley Dunsbar (later of JOURNEY and JEFFERSON STARSHIP) was added on. You can tell right away this isn't what the original MOTHERS (Jimmy Carl Black, Roy Estrada, etc.) had done. Emphasis now put on bathroom humor and penis jokes, which did not endear themselves to the rock critics one bit. But the music was about groupies who demanded the band they're obsessed with play their hit record (with the emphasis "with a bullet"), and plaster it with lots of sexual innuendo, and references to a fight with LED ZEPPELIN at the Edgewater Inn in Seattle involving a baby octopus (which allegedly happened). I liked how they were saying that THREE DOG NIGHT was their favorite band (which was obviously a joke, since THREE DOG NIGHT were always ridiculed for being an overly-commercial band too obsessed with the charts). Another was "Do You Like My New Car", with mention of hopping in the trunk of a Gremlin to get their rocks off. What's really silly is the car in question, the AMC Gremlin, has no trunk, so how can you make out in the back of the Gremlin (not to mention how ridiculously small the Gremlin is - if you thought the original VW Beetle was small, the Gremlin was even smaller). Another song worth mentioning is "Bwana Dik", one of the penis joke songs, where one of the vocalists did all he can to sound exactly like Jim Morrison! They eventually ended up playing "Happy Together", a hit for Flo & Eddie's former band, the TURTLES. This version was obviously a lot less polished than the original, but I guess that's the point. A couple of songs from the MOTHERS and ZAPPA's back catalog are played like "Little House I Used To Live In" (much shorter than the original and no killer violin solo from Don "Sugarcane" Harris) and "Peaches en Regalia".

What to Get: The Ryko and 2012 CD.
Summary: The 2012 CD restores "Willie the Pimp Pt. 2" and eliminates the 1980s-era digital processing FZ added to the album, which debuted on the 1986 "Old Masters" LP. All previous CDs are missing the second part of "Willie" and have additional reverb, echo, and stereo processing.