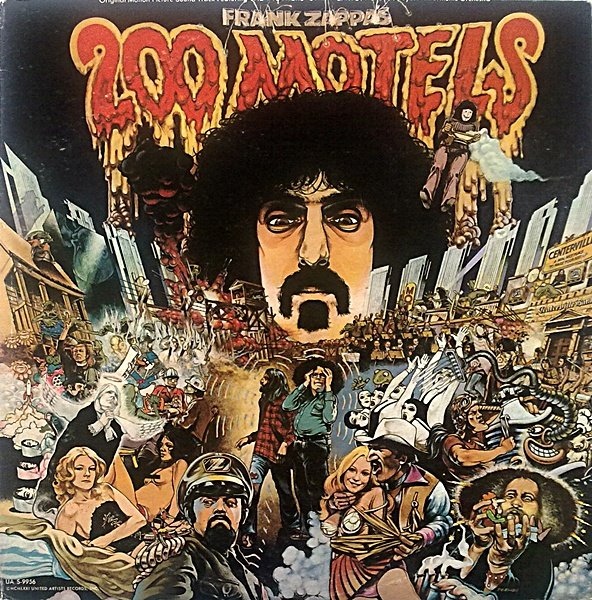 Did not appear on CD until 1997, because Zappa didn't own the rights to release it himself. The CD contained some bonus tracks. It was deleted circa 2002.


Soundtrack album for the Mothers of Invention movie of the same name. One of the strangest low-budget weirdo films I've ever seen. Objectively speaking, the film is a piece of crap. It jumps around various subplots which are never explained and never developed. Ringo Starr and Keith Moon have prominent roles in it, and they provide some of the film's funniest moments. Personally, I love the movie a lot. But I certainly can't expect many other people to like it. You'd need to be very sympathetic to the cause to get through it. In any case, this review isn't about the movie.
The music, however, is indubitably excellent. Zappa had been composing orchestral music for several years in preparation for this project, and it's fantastic. There are a few rock band numbers which are extremely simplistic by Zappa standards; in part to offset the seriousness of the orchestral music, and in part to be playable by Martin Lickert, Ringo's chauffeur, who had to step in at the 11th hour as the band's bass player because Jeff Simmons quit the group mid-production, and he wasn't much of a bassist. He turned out to be a fine actor, though, playing the (big) part of Jeff in the movie.

So what does it sound like? The majority of the tracks are played by a symphony orchestra, sometimes with sung and spoken interjections by characters in the movie. All of it strongly reflects Zappa's affinity for composers such as Varese, Messaien, and Stravinsky - melodic, but refusing to adhere to any "classical" notions of orchestral music. A handful of the songs are performed as rock numbers by the Mothers of Invention, Zappa's band. Mark Volman and Howard Kaylan (ex-Turtles) perform dual lead vocals that are kind of an acquired taste, encouraged as they were to let their freaky sides show. They are the dominant sounds in the mix, leaving the accompaniment sometimes lost in the murkiness of the recording (the music was performed live in the film studio, along with the orchestral parts, making this one of the least-labored Zappa productions in terms of sound quality).

But regardless of the technical shortcomings, the songs are crazy, well-designed, funny, and sometimes even quite touching. "Mystery Roach" acts as a boogie-rock show opener, total nonsense that nonetheless encapsulates the film's theme of "going crazy" perfectly. The suite of songs beginning with "She Painted Up Her Face" is a complex series of vignettes, a disarmingly sensitive portrait of a groupie preparing herself to go out and have a good time. "Daddy Daddy Daddy" is a simply adorable little piece of 50s R&B. And "Magic Fingers" is the big guitar feature you've been waiting for - too bad it only shows up on side four!

The soundtrack's fantastic, as I said, but it's also one of the worst-sounding Zappa albums, as it was pretty much recorded live in the film studio, in what sounds like a large, echoey room (I always thought it sounded like an airplane hangar). If you can get past that, and get past the sometimes sophomoric humor of the rock band pieces (topics du jour: getting high, getting laid, getting VD, and male insecurity in general), then there's plenty to enjoy. After many years and dozens of Zappa albums in my collection, this is still one of the albums I return to most often.

To hear what the 200 Motels soundtrack album might sound like if it were ever to be completely remixed from the original multitracks using today's technologies, you can hear a Zappa stereo remix of "Semi-Fraudulent/Direct-from-Hollywood Overture" made from these original multitracks used as a music bed at the conclusion of the Honker THE TRUE STORY OF 200 MOTELS home video. The difference in quality between the stereo mix Zappa prepared in 1971 for the United Artists soundtrack album and the one Zappa prepared for this Honker home video some fifteen years later is simply stunning.

The MGM version has been given the "compress-the-shit-out-of-it" mix that is so popular with engineers nowadays. This actually benefits rock & roll numbers like "Mystery Roach", but delicate passages such as "Dance of the Just Plain Folks" suffer greatly. For the classical sections, the boot has a superior sound, with much greater dynamic range, clarity, and apparent depth. The MGM release has no depth at all, it sounds as flat as cardboard compared to the bootleg. However the rock numbers have been improved. If only the engineers had treated the tunes with different approaches. Songs like "She Painted Up Her Face" sound great on the MGM, while "Lucy's Seduction ..." is just wallpaper. The MGM is clear due to compression, but lacks depth. The boot has depth and life because of its dynamic range, but lacks "thump". I should add that even though the bootleggers probably used LPs as their source, there is no audible background noise. I believe great care was taken to produce an excellent sounding source, and therefore it stands up favorably to the current legitimate release.