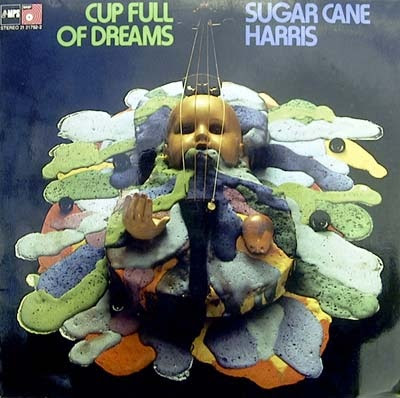 The 'mystery guest' is believed to be Harvey Mandel. A photograph of his face is on the back cover, but it is obscured by a black bar across his eyes.

While Sugar Cane's Got the Blues (MPS, 1972; Reissued Promising Music, 2008), teamed the violinist with Europeans including Norwegian guitarist Terje Rypdal, German keyboardist Wolfgang Dauner and British (though, with a life-changing accident looming, not for long) drummer Robert Wyatt, Cup Full of Dreams finds Don "Sugar Cane" Harris back on American turf, with a group of players that would feature, in various permutations and combinations, on his remaining MPS releases into the mid-1970s, after which he'd mysteriously disappear, until his death in 1999 at the age of 61.

Unlike Got the Blues' lengthier live workouts, Cup Full of Dreams' five tracks are—with the exception of the descending four chord, minor-keyed, 14-minute title track— considerably shorter, though they're just as much about a prescient jam band aesthetic, where Harris' relatively sketchy songs are nothing more than jumping off points for plenty of individual and collective soloing. A little more focused, avoiding some of Got the Blues' freer tendencies, they're equally rock-centric, with the fiery "Bad Feet" fading in, clearly in the midst of a jam, all thumping bass and gritty guitars, and sounding like an outtake from Frank Zappa's Hot Rats, where Sugar Cane performed on its two longest, jammiest tracks. "Generation of Vipers" also sports a backbeat-driven pulse, ending the album on a high-volume, high octane note, with Sugar Cane's strummed strings as visceral as his searing arco.

For a label that seemed particularly committed to the violin—releasing albums by other incendiary bowers including Jean-Luc Ponty, Zbigniew Seifert and Michael Urbaniak, as well as mainstreamers like Stephane Grappelli and Stuff Smith—Harris was clearly MPS' most urban player, steeped in a blues tradition that's at the core of Cup Full of Dreams. But while a rock mentality defines the entire set, there's a closer link to the mainstream on tracks like the opening "Runnin' Away," a minor-key blues that swings hard, and features an overdriven solo from guitarist Harvey Mandel (originally credited, simply, as "Mystery Guest"), delivering an early example of the two-handed tapping technique that would become de rigueur a decade later with guitarists like Stanley Jordan. The Canned Heat veteran is joined by another alum from that group, bassist Larry Taylor, who walks with aplomb alongside drummer Paul Lagos.

"Hattie's Bathtub" also swings, though more amiably, its descending four-chord pattern not unlike the title track's, and featuring a brief but equally gritty electric piano solo from Dewey Terry, a keyboardist who dates back to the 1950s with Harris, when the two performed as Don & Dewey, with the violinist on guitar.

But in a set that also includes saxophonist Richard Aplan and guitarist Randy Resnick, it's Harris who takes an album that could have been nothing more than meandering jams into the stratosphere. Seifert may have had a post-Coltrane modal fire, while Ponty was gradually moving towards a fusion direction, but Cup Full of Dreams proves Harris to be MPS' rawest, most conflagrant violinist. Hopefully Promising Music will put more of this often-overlooked violinist's MPS dates back into print.