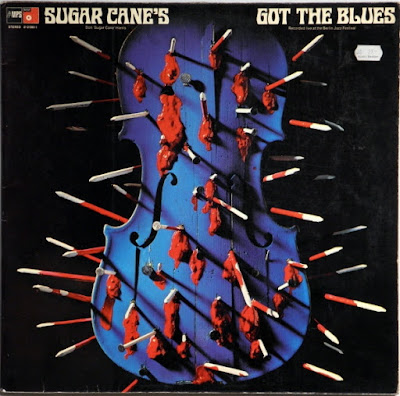 This was a real find for me. Recorded live in Berlin in 1971 at the "Violin Summit" where producer Joachim Berendt put this supergroup together to celebrate the violin in Jazz and Blues. The lineup is killer ! These are some of the most well known players in Free-Jazz and Avant-Garde Rock.Yes Sugar Cane Harris is on violin, he had played with John Mayall as well as on a number of Frank Zappa albums including "Hot Rats", "Apostrophe" and many more. He's been called the Jimi Hendrix of violin. Add former SOFT MACHINE drummer Robert Wyatt who had just left that band. Neville Whitehead on bass who had recorded with many greats including Wyatt and Tippett and was part of the ELTON DEAN QUARTET, live SOFT MACHINE and ISOTOPE. On keyboards we get Wolfgang Dauner from the great German band ET CETERA. Volker Kriegel plays most of the guitar (3 tracks) while the amazing Terje Rypdal plays on one song. It still blows me away to think of Wyatt and Rypdal on stage together in the same band. Cool stuff right here folks.The surprising thing to me was that the violin doesn't dominate the proceedings like I thought it would. Sugar Cane comes across as a humble person who realized that he was surrounded with a very talented band and therefore he didn't try to steal the show. He does add vocals and does it well.This is very much a Blues / Jazz album,or should I say Jazz / Blues (haha).
"Liz Pineapple Wonderful" opens with someone speaking in German introducing the band.The music then comes in and it's uptempo with vocals.The violin replaces the vocals after 2 1/2 minutes. Great sound. The guitar leads before 4 1/2 minutes and the drumming is very active. Nice bass too I might add. The vocals are back after 7 1/2 minutes. Big finish after 9 minutes. Sugar Cane then announces the band quickly by their last names then says "out-a-sight". He compliments the audience too.

"Sugar Cane's Got The Blues" opens with violin then piano a minute in and other sparse sounds.Vocals cry out briefly 5 1/2 minutes in. Bass to the fore then the guitar joins in as it builds with drums.Piano joins in after 8 1/2 minutes then goes solo before 10 minutes. Cool section.Violin before 11 minutes and it becomes dissonant late as he cries out one more time. Huge applause after this song and every song.

"Song For My Father" is a Horace Silver cover. This is the song Terje Rypdal plays on.You can hear all the guys playing early on in a fairly laid back manner but that will change. So much going on here. Guitar to the fore 4 1/2 minutes and Terje continues to lead until 7 1/2 minutes when the violin returns. Such an incredible track !

"Where's My Sunshine" is a Bluesy number with vocals. Catchy too. Violin or vocals mainly lead although Kriegel leads on guitar 5 1/2 minutes in then piano. When the song ends Sugar Cane says "I'd like to introduce the fellas". He seemed to be in his glory at this concert and he deserves a lot of praise. Such a talented man.

Violinist Don "Sugar Cane" Harris seemed to burst onto the scene with two appearances on Frank Zappa's classic Hot Rats (Rykodisc, 1969), resulting in a flurry of recording activity that mysteriously died out by the mid-1970s. Got the Blues captures two electrifying performance at Berlin's Philharmonic Hall from November, 1971, a potent combination of groove and improvisational freedom that makes Harris' later disappearance from the scene (he passed away in 1999) all the more curious.

The quintet of musicians come from diverse backgrounds: from Britain, Soft Machine drummer Robert Wyatt and bassist Neville Whitehead, who traveled in similar circles; and from Germany, keyboardist Wolfgang Dauner and guitarist Volker Kriegel, two multi-disciplinary players comfortable across a broad spectrum of styles, one example being Kriegel's work on The Dave Pike Set's Live at the Philharmonie (Promising Music/MPS, 2008). Norwegian guitarist/ECM mainstay Terje Rypdal replaces Kreigel on Got the Blues's most purely jazz-centric track, Horace Silver's "Song for My Father," which may sport the album's most relaxed vibe, but still can't seem to restrain Harris' fiery delivery.

The balance of the disc's four extended tracks belong to Harris. "Liz Pineapple Wonderful" may at first revolve around a simple set of changes and, later, a one-chord vamp, but it grooves mightily with relentless energy. In addition to a "burning down the house" solo from Harris, he also sings on the track, as he does on the pseudo-swinging minor-keyed title track which, after another introductory two-chord vamp, turns modal and double time for individual and in tandem solos from Dauner and Kriegel before a finale with everyone in the pool for three minutes of spirited free play. Harris also sings on the funky closer, "Where's My Sunshine," another lengthy vamp that morphs into a blues, with a surprisingly authentic piano solo from Dauner.

Harris' unrelenting and passionate delivery keeps the excitement level high throughout, despite Got the Blues' largely simple and vamp-based tunes. And while Kriegel's jazz/rock tendencies are no surprise to those familiar with him, hearing the usually free jazz-centric Dauner and Whitehead kick out the jams alongside Wyatt's powerful drumming is an eye and ear-opener. In many ways, it's this very multi-disciplinary nature of this collective that allows an album this compositionally spare to be so viscerally compelling.

Harris recorded a number of other discs for MPS that will, no doubt, see first-time release on CD thanks to Promising Music. Until then, Sugar Cane's Got the Blues will serve as a fine introduction to those unfamiliar with this unsung hero of jazz/rock violin.
Posted by Zen Archer at 7:42:00 PM