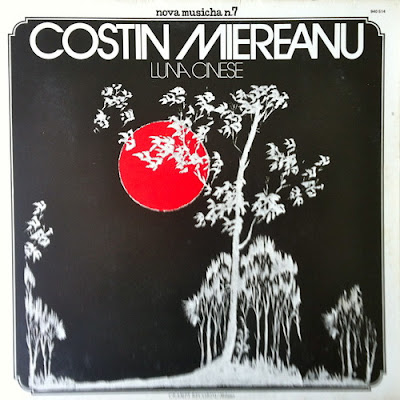 Costin Miereanu was born on February 27, 1943. A graduate of the Bucharest Conservatory, Miereanu entered the international musical world in 1967, when his avant-garde piano concerto Finis coronat opus was awarded the Gaudeamus International Composers Award. One year later, following an invitation to Darmstadt, Miereanu joined the long line of Romanian intellectuals who were disobeying the restrictions on emigration imposed by the Romanian communist regime, and decided to never return to his homeland. Eventually he settled in Paris, a decision of fundamental impact not only on his career, but especially on the freedom of expression as an artist.

During his student years in Bucharest, Miereanu benefited greatly from the guidance of professors such as Stefan Niculescu, Aurel Stroe, Anatol Vieru, Tiberiu Olah, and Myriam Marbé, all part of the elite generation of Romanian post-war composers. This was Miereanu’s opportunity to come in contact with the most recent trends in Western composition, through scores and recordings more or less officially made available to Romanian musicians, since they were diametrically opposed to the communist aesthetic doctrine. Alongside his growing interest in new music, Miereanu also pursued a thorough analysis of ancient music, in particular the works of Flemish school composers. Here he found a technique he would make extensive use of in his mature compositions: the continuous transformation of a musical motive or idea.

In the musical landscape of his native country, Miereanu became a prominent figure already as a student: for several years he published articles in an avant-garde cultural magazine, The Amphitheatre, debating issues on modern music and contemporary composers, simultaneously engaging into preoccupations as a critic. But the first major step as a musicologist was taken once he joined Doru Popovici – Romanian clarinettist and ardent promoter of the contemporary music – in writing a book dedicated to the early stages of Romanian musique savante. Initially published as fragments in important journals, the book had as its main goal the rehabilitation of a historical truth that had been the victim of imprecisions or wrongful interpretations.

Miereanu’s multi-faceted activity, so obviously put in the service of modern music, soon labelled him as a rebel in the eyes of the political authorities. In 1967, he was denied the access to a German scholarship he had received to study with Penderecki in Essen, but the chance was, nevertheless, by his side. Later that year, he travelled to Darmstadt, to work with Stockhausen, Ligeti, and Karkoschka at the Ferienkurse für Neue Musik. He went back to Darmstadt in 1968 and never returned to his homeland.

Miereanu’s talent was noticed not only by Stockhausen, who selected him for the team of the project Musik für ein Haus, but also by Romanian Mica Salabert, president of the Parisian publishing house Salabert. Committed to contemporary music and notably to the generation of Romanian young composers, Mika Salabert immediately offered Miereanu a contract, by which some of his already existent works and all the others he would compose were to be published under this label. Later, between 1981 and 1991, Miereanu assumed the artistic directorship of Salabert.

Miereanu’s interest to pursue multi-disciplinary studies led him to an encounter that changed the entire course of his professional life: in 1970, he was admitted at the Ecole des Hautes Etudes en Sciences Sociales, where he met and studied with Greimas and Barthes. In 1978, he defended his doctorate in musical semiotics, under Greimas’s supervision, and in 1979 his State Doctorate for Letters and Social Sciences, under Daniel Charles (Université Paris VIII). In 1981, Miereanu was appointed professor at Université Paris I, where he taught Philosophy, Aesthetics, and Artistic Sciences until 2013, when he was conferred the title of professor emeritus.

I've always found it baffling that; of all of the Cramps titles reissued and re-reissued over the past few years, this piece, considered by many followers of the “Dark Side-long Aleatoric Electro-Acoustic Collage” aesthetic - see Dub Taylor, Luis De Pablo, Jean Claude Eloy, et.al - to be one of the finest examples of said, was never given its due time in the warm, contemporary sun. Kudos, then, for the Nth time, to Mr. P.C. C.P. for his prescient, timely efforts. Do, aside from “Dark Side-long Aleatoric Electro-Acoustic Collage,” what does it sound like you ask? imagine Xenakis’ bells-and-trinkets epic “Bohor” overlaid with Basil Kirchin’s “Worlds within Worlds” and generations of pan-linguistic self-help / instructional programs - at any given time in the piece there are at least 4-5 separate layers of gated textures, field recordings, dissonant / glassy ensemble playing, and a bed of Synthesized Drone-sound. The voices that dominate the first half in strident, authoritative tones give way in the second half to sparse moaning and sustained ululations, leaving more room for the woozy “Instrumental” textures. An ominous, creepy piece; not for the weak of constitution.