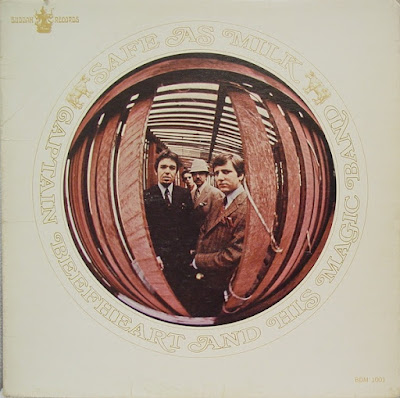 CAPTAIN BEEFHEART (real name: DON VAN VLIET) is a true genius and definitely one of the most original and innovative musicians of the twentieth century. With his blend of blues, rock 'n' roll, free-jazz, avantgarde and poetry, he invented his own genre of music, which even seems to go beyond music itself. Captain Beefheart's music at its best is a form of art, that is maybe best compared to an abstract painting.

Captain Beefheart was born January 15, 1941 in Glendale, California. He was born Don Vliet, but he changed his name into Don van Vliet in the early sixties. His genius was discovered very early through his paintings and sculptures, and at the age of thirteen, he was offered a scholarship to study in Europe. His parents didn't accept the offer, and decided to move to Lancaster instead. It was during his stay there, that Van Vliet met Frank Zappa (see also FRANK ZAPPA) in high school, and that he taught himself how to play harmonica and saxophone. Van Vliet derived the name Captain Beefheart from Zappa's and his film-project, called "Captain Beefheart Meets The Grunt People". The film was never completed.

In 1964 Captain Beefheart formed The Magic Band, and in 1965 the band signed to A&M, for which they recorded two singles. The first, "Diddy Wah Diddy" (The Bo Diddley-song), was actually quite successful, but A&M wasn't interested in Beefheart's ideas for an entire album. In 1967, Captain Beefheart and his Magic Band finally got the opportunity to release their debut album, "Safe As Milk", on the label Buddah. At this time, the band consisted of guitarists Alex St. Clair, Ry Cooder and Antennae Jimmy Semens (born Jeff Cotton), bassist Jerry Handley and drummer Drumbo (John French).

After 1968's "Strictly Personal" was sabotaged by the producer Bob Krasnow (he radically remixed the album without Van Vliet's permission), Frank Zappa offered his old friend to make an album on his own label Straight Records, promising him complete creative freedom. Of course Van Vliet couldn't refuse this offer, and he recorded arguably the weirdest, most fascinating, original and avantgarde rock album ever made: "Trout Mask Replica". It was released in 1969 and it consisted of two discs, on which Beefheart and his colleagues "freaked out" in 28 raw, poetic tracks, seemingly ignoring all musical borders. A true masterpiece, graced by some fantastic cover artwork. By this time, Captain Beefheart had given all band members nicknames. The Magic Band now consisted of: Antennae Jimmy Semens (guitar), Drumbo (drums), Zoot Horn Rollo (guitar and flute, born Bill Harkleroad), Rockette Morton (bass guitar, real name Mark Boston), The Mascara Snake (Victor Fleming, bass clarinet) and Captain Beefheart (vocals, bass clarinet and tenor and soprano sax).

Thanks to "Trout Mask Replica" and its follow-up, "Lick My Decals Off, Baby" (1970), Captain Beefheart gained popularity in both the United States and Europe. During the following years, Artie Tripp (Ed Marimba), Elliott Ingber (Winged Eel Fingerling) and Roy Estrada (Orejon), all ex-Mothers Of Invention (see also FRANK ZAPPA) were members of The Magic Band. On both "The Spotlight Kid" and "Clear Spot" (both released in 1972), the music sounded a bit more commercial and certainly more accessible than before. "Conditionally Guaranteed" and "Bluejeans & Moonbeams" (both released in 1974) are regarded by most people as the Captain's weakest efforts. It is true that "Bluejeans & Moonbeams" is not as experimental as Beefheart's early recordings, but I think it still contains some beautiful blues-oriented songs that are well worth a listen.

After a short collaboration with Frank Zappa (which can be heard on "Bongo Fury", see also FRANK ZAPPA), Captain Beefheart returned to shape with 1978's "Shiny Beast (Bat Chain Puller)" and 1980's "Doc At The Radar Station", on which we can hear, among others, Eric Drew Feldman (bass guitar, synthesiser, keyboards), Jeff Morris Tepper (guitar) and Bruce Fowler (trombone, ex-ZAPPA). In 1982, the band now including Gary Lucas and Jeff Morris Tepper on guitar, Richard Snyder on bass guitar and Cliff Martinez on drums, Captain Beefheart released "Ice Cream For Crow". It would turn out to be his last album, for after "Ice Cream For Crow", Van Vliet decided to devote the rest of his life to painting. And although his paintings are as brilliant as his music, it's a pity he isn't active in the world of music anymore. Still, his albums are a nice comfort.

The Captain's 'heritage':
Captain Beefheart's music has influenced many groups in the past, and it continues to do so as we speak. A fine example of this is the White Stripes; before their major break-through, they released a vinyl single, including covers of the Beefheart songs "Party Of Special Things To Do", "China Pig" and "Ashtray Heart".
But the best news for Beefheart fans is that in 2003, members from several Magic Band line-ups (John French, Mark Boston, Gary Lucas and Denny Walley) and drummer Michael Taylor reformed The Magic Band. They have been giving many shows since then, and they even released an album with re-recorded classsics, called "Back To The Front" and a live-DVD, called "Crow's Milk". This way, the Captain's music continues to live on in many guises.

Suggestions:
It's difficult to say which album is the best starting point when you're unfamiliar with Captain Beafheart's music. My favourite album is "Trout Mask Replica" and I also like "Doc At The Radar Station a lot. If you want a more easy introduction, try "The Spotlight Kid" or "Clear Spot"; they are both more accessible records. But I think the best thing to do is just try "Trout Mask Replica". It will grow on you with every listen.


Reading the liner notes from the remastered edition of "Safe As Milk", it is no wonder that the music on this record sounds odd (to say the least). Being completely unfamiliar with this "special" style of music, it is my opinion that a listener could hardly deliver comprehensive thoughts on this album.

While the album maintains a clear 60's sound and approach, it is apparent that there is something uncommon or different about this band. I could almost describe the music as eclectic blues (if there is such a description). Vliet's vocals are interesting and quite diverse. Similarly diverse is the mood from track to track - it can vary from (surprisingly) soft and catchy tunes like I'm Glad (fantastic vocal performance) to bizarre, avant-garde boogies like Dropout Boogie. The first half of the album is focused to more standard blues patterns with the opening track being a memorable country/blues tune.

While Yellow Brick Road sticks to a similar pleasant country/blues pattern, side b of the album is slightly more adventurous. ABBA Zaba is a bizarre tribal-rhythm based track with some great rhythm section performance that shows the band's diversity. Oddly, the highlights of the album lay within the mellower and most sophisticated compositions like Where there's Woman and Autumn's Child. Both these compositions show progressive elements and changes in tempo and mood.

The bonus tracks take the experimentation a step further and mainly consist of instrumental compositions with high doses of improvisation. The overall package should appeal to fans of bizarre/avant-garde blues-based music with a strong 60s feeling. I would be reluctant to recommend this to a "new-starter" in this genre (like myself), but there are moments of sheer quality and musicianship that could appeal to any prog fan. Similarly there are eclectic moments that could make this an indifferent debut, so I would proceed with caution.
Posted by Zen Archer at 2:18:00 PM