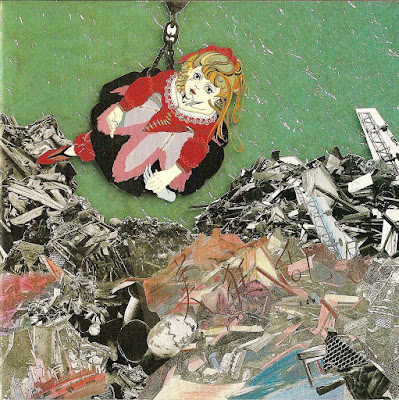 
Bi Kyo Ran's second album finds the band persisting on resurrecting the momentum of "Red"-era King Crimson with an added refurbishing hard rock-centered freshness. Kunio Suma, doubling on lead guitar and mellotron, leads the band through the valleys of his Crimsonian musical vision. The opener 'Silent Running' is a real treat of exciting vibe, due to the combination of rawness and melodic catchiness, displaying a convincing sense of energy and not using an exaggerated dose of complication concerning the arrangements. Suma's effective riffs and aggressive Spartan solos on guitar are firmly sustained by the rhythm scaffold. In my opinion, the stellar moment of this number is the violin solo provided by guest Toshihiro Nakanishi, whose musical sensibility somewhat reminds me of Eddie Jobson's. As catchy as this track is, it can't compete with the other two, which get to reveal the real dimension of Bi Kyo Ran's powerful prog trend to the listener's ears. 'Prediction' kicks off with a deceitfully languid motif that soon gives way to a diverse exposure of instrumental density, at times showing off in a very frontal manner, at times partially hiding behind a mask of complex simplicity with slight bluesy flavours. This time Suma really goes enthusiastic - indeed, almost mad - with his Fripp-inspired neurotic guitar textures, leading the way for the development of the composed ideas. The track's climax starts with a weird sonic sequence, including horns, until the initial motif is briefly reprised - a great ending. But the album's great ending is incarnated in 'Suite Ran', the sidelong track that occupied the entire B-side of the vinyl edition. This 21-minute long, 5-part monster delivers the most bizarre melodies and counterpoints in the album, while the track's overall spirit alternates between the sinister and the ethereal, like a nightmare that has a mystic vibe in it. The mellotron is heavily featured on this one, rivaling with the lead guitar in the "stealing the spotlight" game like a dreadful contender in a battlefield of madmen: the minimalistic horn arrangements serve as allies for the mellotron side, in this way, enhancing the aura of emotional oppression that almost fills the suite's entirety. Picture a triple marriage of 'Red' straightforward harshness, 'Lark's Tongues in Aspic' inscrutable magic and 'Fracture' storming power, held in the exuberant cathedral of "Lizard". This album displays a solid confluence of the power of complex rock and the overall artistic neurosis of King Crimson, with a predominance of the latter factor: in many ways it would be fair to say that Bi Kyo Ran's most notable virtue is their ability to recapture the musical magic of the average prog fan's favorite KC period, but that's not the whole picture. Bi Kyo Ran knows how to handle the art of noise in the forest of their obvious influences, and the excellent "Parallax" is a proof of that.