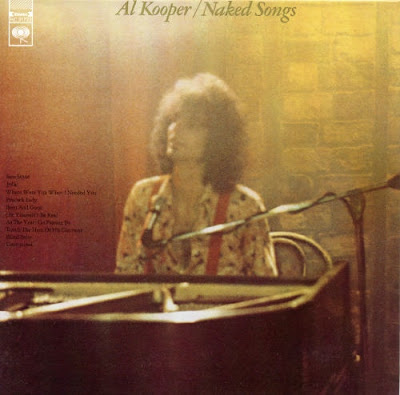 Naked Songs represents the other end of Al Kooper's early career from I Stand Alone. Where that first album was recorded very gradually at the outset of his solo career, soon after exiting Blood, Sweat & Tears, Naked Songs was a much more cohesive work (cut in New York and Georgia) from the end of his stay at Columbia Records. Ironically, it was a contractually obligated album, but never one to throw away an opportunity, Kooper embraced soul, gospel, blues, pop, and even country music in the course of filling its two sides. Playing his usual array of instruments, including loud, note-bending blues guitar and gospel-tinged organ on "As the Years Go Passing By," he effortlessly switches gears to the smoother pop-soul sound of "Jolie," then straight country with a blues tinge on "Blind Baby." John Prine's grim and uncompromising "Sam Stone" gets an extraordinary performance, but the real surprise is the presence of Sam Cooke's Soul Stirrers-era gospel classic "Touch the Hem of His Garment" -- the latter is one of a pair of Cooke songs (the other is "A Change Is Gonna Come") that one would not expect any white artist to try and cover, much less do well, but Kooper does it justice and then some, and this track alone is worth the price of the album. The album benefits from the fact that Kooper had spent a good chunk of the prior year working with the Atlanta Rhythm Section (which appears here) as well as discovering Lynyrd Skynyrd. Naked Songs may have been intended mostly to get him out of his Columbia contract, but it proved a highlight of his career as well as his last new recording for four years. Naked Songs was reissued in Japan in 2003 in a mini-LP jacket format in state-of-the-art 24-bit digital audio.