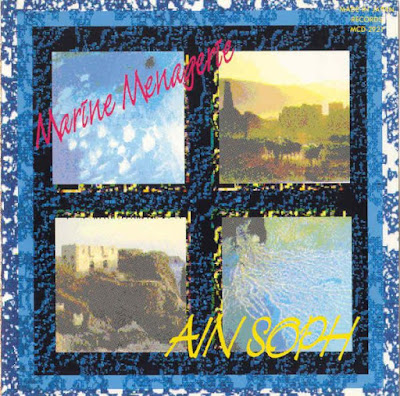 
Ain Soph's third album consists mostly of re-recorded versions of tunes from the band's early days - written and developed during the late 70s -, plus an original version of 'Variations on a Theme by Brian Smith', whose first official version had appeared in the "Story of Mysterious Forest" album. This original version is somewhat rougher, with its varied musical motifs less developed, and a harder edge on the guitar parts. Speaking of the general tendency of "Marine Menagerie" as a whole, the band's approach is focused on giving more room to the melodic progressive stuff (a-la Camel), which means that the jazz stuff is a bit decreased, although still maintaining a strong presence in the band's sound and style. The album kicks off with a brief, ethereal display of guitar picks on the higher notes, appropriately titled 'Wind & Water', which then gives way to the beautiful, melancholic 'Flooded by the Sun', which sounds to me very much inspired by "Moon Madness"-era Camel. Things remain the same with the following namesake track, if only developed a bit further thanks to its longer extension. With the excellent piano solo 'Little Pieces Part 3' (keyboardist Fujikawa seems to be offering a tribute to the memory of Alan Gowen) and the aforementioned 'Variations' the Canterbury thing that Ain Soph so unabashedly loves returns to the fore. The same Canterbury thing persists on the last two suites, combining itself fluidly with the Camel- inspired symphonic majesty. 'Ride on a Camel' and 'Metronome 7/8' (the latter, including a quotation from a Caravan's theme from their '74 live album) contain your usual prog pomp and circumstance, full of clever musical ideas, mood and tempo shifts, impeccable performances in both the alternate guitar/synth solos and the solid rhythm section: all of these elements are fully integrated with good taste and exquisite class, which allows the band not to lose sight of the musical motifs, always keeping the soloing in its right place. Though this album doesn't impress me as much as their previous two, it is definitely an excellent opus.
Posted by Zen Archer at 10:53:00 PM